It started with a Cub
by Ken Elmer
Although not the one in the pictures!
Having said that, here I am at Awsworth out and about riding in the 2021 TOMCC Great British Challenge - read on...
​The next bike was a 350cc Tiger 90. Bit of a café racer bodge job although I was really pleased with it and my brother, who was then between bikes, often persuaded me to let him borrow it. He felt partly responsible when it seriously broke while he was riding it.
On investigation, it looked like one of the big end nuts had at some time been replaced with an aluminium one. The aluminium was still in the bolt threads and the nut in the bottom of the engine with quite a lot of other bits!
With new cranks, barrel and head needed I thought they might as well be a bit bigger, and it became a 500cc with high lift cams, etc. This got me around nicely as well as surprisingly only one speeding fine.

​It was about this time I was offered the Tiger Cub in about 10 parts and supposedly a rebuilt engine. I was finishing my apprenticeship and fancied a complete restoration project and it didn’t take long to take the engine apart enough to discover the big end bearing was completely worn out.
Luckily the seller agreed to sort it, and I let him take away the bottom half of the engine, empty of gears, etc. It was duly returned with a good big end bearing fitted and properly balanced, so I was happy - big error!

​While all the above was happening, I had stripped the bike down to a bare frame and begun to rebuild it properly. But unfortunately real life got in the way of my project……
Marriage, kids, cars, mortgage. The vast majority of readers have been through it all I'm sure. The Cub went into boxes and was left mostly in the attic of the house we bought, then moved on to the next house we bought and stayed that way for a long, long time.

Well, the kids grew up and left. What could we do when we retired? I knew straight away for me. I was further encouraged, when our youngest son joined me up into the Triumph Owners' Motor Cycle Club (TOMCC) as a very nice present that I have kept on going every year since.

I bought a nice big (should have been bigger) shed and set up with my father's workbench in it. All the boxes were emptied out and carefully assembled into the machine I now own and run. There was very little rust to deal with, as many of the small parts had been electro-plated when I had stripped it down. An engineering apprenticeship really came in useful.

One or two parts were missing, confusing or unserviceable, but advice from friends in Nottingham Arrows TOMCC branch helped and led me to use TMS in Nottingham or failing that, Greystones and one or two others on the web for almost anything that was needed. 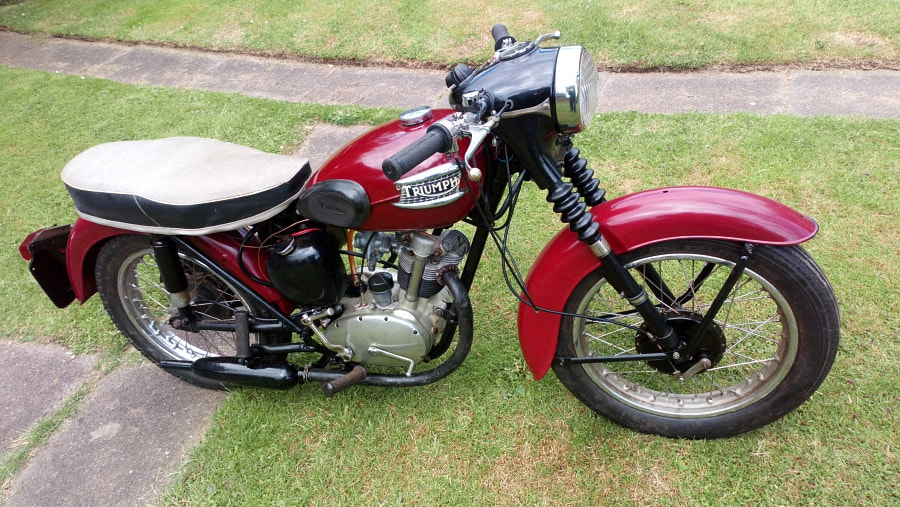 It was all done by me: some may disagree with using rattle cans for the paint but I am proud of what I have done. I hit the road near the end of 2019, slowly fixed minor issues and between lockdowns increased the distances travelled till the big end failed due to an absence of oil feed.
Absence of oil. Remember the ‘big error’, 40 years earlier?
​
During the engine second rebuild, I realised what was very likely to have been the problem there. When a new con rod and crank pin arrives the oil passages are sealed up with wax, which has to be removed before fitting otherwise the oil doesn’t make it to where it is needed. That’s what I blame anyway.
During the rebuild I also managed to strip the spark plug threads, but found this to be a much easier thing to fix at home than I at first imagined using a spark plug thread repair kit from eBay. 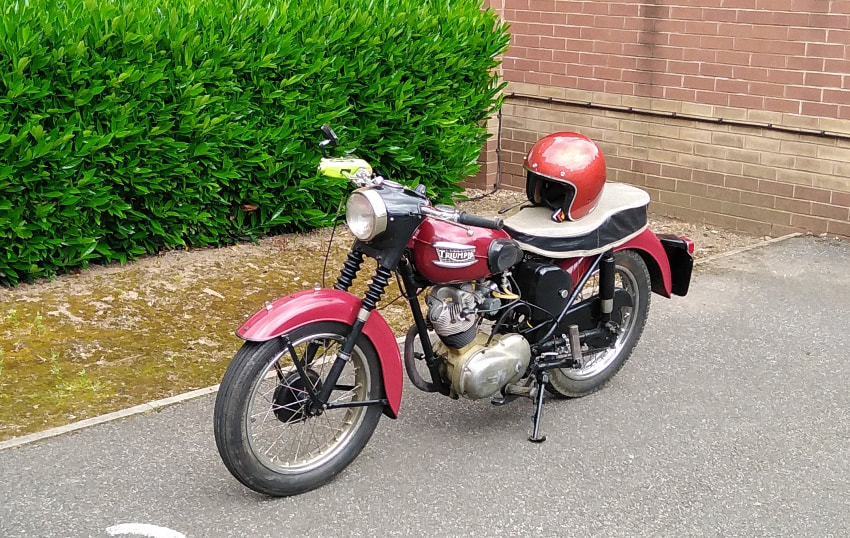 One other thing I found tricky to sort out was the original Lucas horn. I had stripped cleaned and readjusted it internally (like everything else) but it still sounded a bit, nerrr. In the end I wired a small modern horn in parallel with it meaning I now have the volume as well as retaining the original components.

I have also retained and used the original 6v distributer ignition system. The alternator though is not properly charging the battery. Surprisingly the engine didn’t try to cut out till the battery got down to 4.3v, and then only died on tick over. I did manage to ride home using low gears and hoped that using solely LED bulbs would get around this, but it seems not. So that’s the next job.
Maybe in the winter I will be looking for the next project, or maybe improving this one.