Mountain Cub Mystery
Years ago Stephan Britt had a ’64 Cub that he used for trials, but unfortunately had to sell it due to a move.
Now, after reading the TC&T Section column in the back of the TOMCC magazine 'Nacelle' over the past year or so, he's been inspired to get back into Cubs!

He's over in the States and has recently purchased a 1967 Triumph Mountain Cub and...
...he's posed a really interesting question. 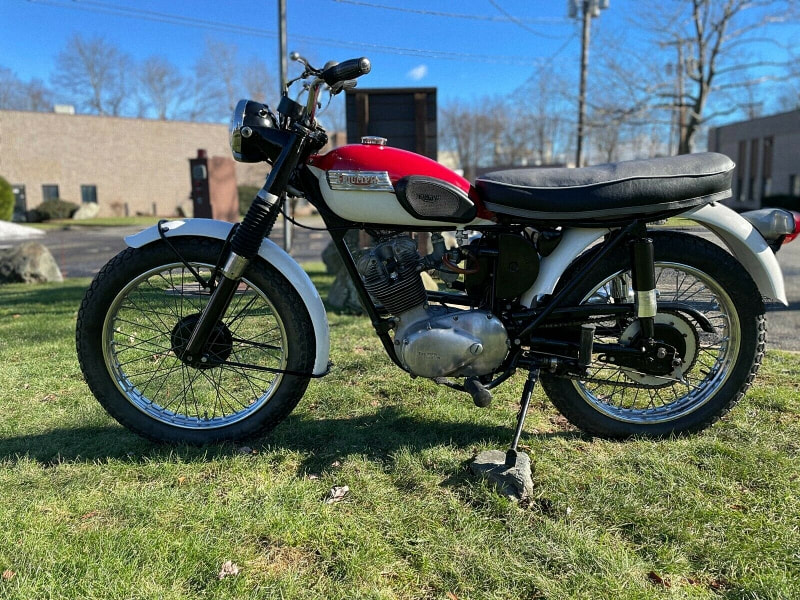 Stephan's Cub is in Grenadier Red and Alaskan White but...
...he's hoping someone could help identify the gold and white color scheme of Bruce Brown’s Mountain Cub.

For those who don't know the story; in 1966, Bruce Brown released the film 'The Endless Summer', which cost around $50,000 to make but which raked in around $20 million at the box office.
And with an increase in his bank balance, Bruce traded in his Honda 50cc step-through for a 1967 Triumph Mountain Cub. A machine on which he explored off-road trails, raced in the desert, and eventually led to a friendship with actor/rider Steve McQueen.
The two collaborated on what, for many people (myself included), is still the greatest motorcycle film ever made - 'On Any Sunday'; with Brown directing and McQueen both producing and taking a leading role.

Brown owned his Mountain Cub for close on 50 years, before selling it to a close family friend shortly before his death in 2017.
​
The bike hadn't been used for many years, remaining un-restored; and that is the condition it was still in when it came up for sale at a Bonhams Auction on 5th October 2019 at the Barber Motorsports Museum with just 1377 miles on the odometer. A copy of the bill of sale signed by Bruce Brown accompanied the motorcycle. 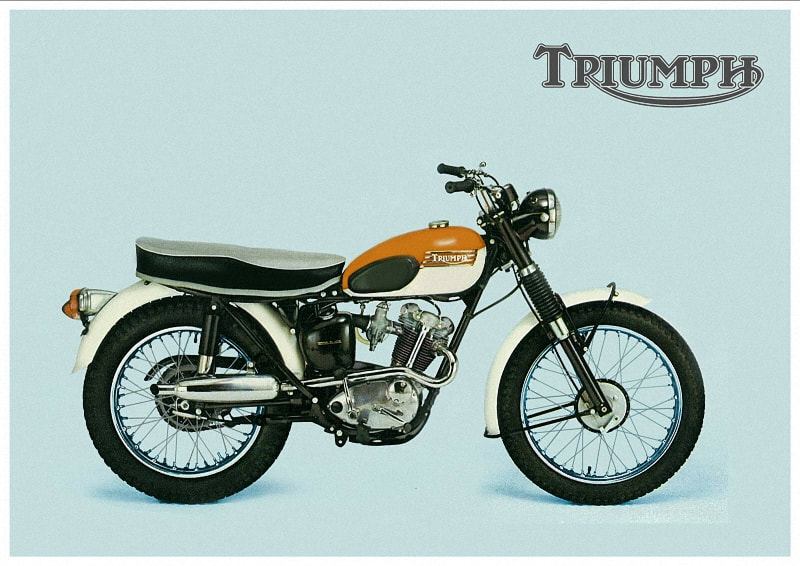 The story of how the Mountain Cub actually came into being is a really interesting one and is told in the 'Triumph Motorcycles in America' book by Lindsay Brooke and David Gaylin.

In late 1963, JoMo sales manager Don Brown was on a motorcycle camping trip with two Triumph dealers, and after a day's trail riding on a trio of Tiger Cubs they started discussing the sales possibilities of a Sports Cub fitted with wide-ratio gearbox, high-level exhaust, etc.

One of the dealers was Joe Sarkes, and Don Brown asked him if he would build a prototype and send him some photographs. Brown named it a  'Mountain Cub'.
No sooner had it appeared than orders flooded in and as a result, the Mountain Cub became an official Triumph Tiger Cub model built at the Meriden factory.

Those are the facts as recorded, and now here are my own thoughts on the colour scheme; although it is all supposition.
​
I wonder if the picture of the Cub in the gold/white scheme is taken from one of the photographs Joe Sarkes sent through to Don Brown of the prototype Mountain Cub?
It would need to be a different colour from the standard Cubs of the time, and Triumph was already using gold and white colours in their paint schemes.

Triumph America used to send various paint schemes, which they thought would interest riders in the USA, to Meriden for evaluation. Could this colour have been one of them, and which then appeared as 'Burnished Gold' on some of the 1965 models?

The prototype Mountain Cub colours would have been sprayed perhaps early 1964, and the 1965-year Triumphs would have started to be produced around the September of '64.
Could it be that a batch of Mountain Cubs were repainted in the Gold/White scheme after they arrived in America due to popular demand from riders there?