Saving Sylvia
by Adrian
Once back in Gloucestershire I contacted Jason at Alien Bikes who battled February snow to collect the bike, now nicknamed ‘Sylvia’, and deliver her to my home.
I was keen to see if she’d run, so I cleaned the carb, set the points and connected a battery, amazingly there was a fat spark at the plug and the lights worked, despite the exposure to the elements that the switch had suffered.
Luckily the tank wasn’t corroded inside so I fuelled up, put some oil down the plug hole, tickled the carb and after a dozen or so kicks she burst into smokey life. Result! Oil was circulating but she sounded a bit rough. At this point the kickstart pawl failed, queue total strip down.

​Without going into massive detail, the frame, swing arm and nacelle went for powder coating whilst I cleaned up and painted the shocks and forks. New 17” stainless rims and spokes were ordered from the Devon Rim Co. I cleaned up and painted the hubs and replaced the bearings. Antig in Gloucester rebuilt the wheels and I treated them to new tyres.
The swing arm bushes were clapped so I replaced them with a kit using metalastic bushes from Feked Ltd. The fork seals and steering bearings were replaced too.
I couldn’t get hold of a battery box lid and missed out on a few on eBay. New boxes and lids were supposed to be coming available, at a price, but eventually I won an eBay auction and got a really good box and lid. All the tin wear went off to Dennis’s Motorcycle Paint in Cirencester and he did a great job in Crystal Grey, the original colour.

The motor was a mix of 1950’s and 60’s, having a single row primary chain, later distributor type cases and square barrel and head. The clutch had to be unstuck  and new springs were fitted, and I discovered that the drive side main bearing was rotating in the crankcase! Tom at Ryder Design in Cheltenham worked his magic and repaired it.
Fortunately the rest of the motor was OK and all I had to do was grind in the valves, fit new rings and replace the kickstart pawl.
The V5 never materialised so I got a replacement from the DVLA without any difficulties.
It was now January and not being a keen winter rider, all I could do was admire Sylvia in the garage and plan all the rides I was going to enjoy once Spring had sprung. 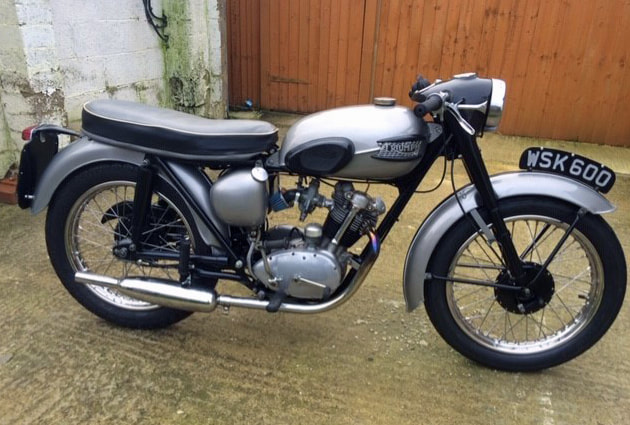 ​The season opener for me is the VMCC’s Felix Burke scatter rally at the end of March, so I entered that and planned to enter the Signpost Rally in May. Sadly the Corona Bloody Virus has scuppered those plans so, other than for the occasional sneaky ‘test’ ride, Sylvia has had to remain in quarantine.
It’s now May 10th and maybe Boris is going to allow us a bit more liberty in his address to the nation tonight. So hopefully, shortly, Sylvia and I will see you out on the road where we all belong.
​
And maybe Aunt Sylvia will get her first ride for 30 years!