Bought, Sold, Bought Back, Stored, Restored
and now a Show Winner!
Owner: Greg Wheadon : Words by Steve Jackson
​This bike was also the subject of an article by Mick Duckworth that appeared in Volume 2017-4 of Vintage Bike Magazine, U.S.A.
​This story started way back in the late 1970's with three lads riding bikes up and down a strip of tarmac bordering a wood yard. The three riders were Greg Wheadon, his twin brother Chas, and their mutual friend Brian Nash.
​Greg knew who his brother had sold the Cub to and when, a few years later he realised it wasn't being ridden much, asked the owner if he would like to sell it. No sooner said than done, the transaction was completed and Greg became the new owner of the same machine his two brothers had owned in the past!

Finally, after riding it himself for a number of years, the Cub was laid up, although it was definitely not forgotten; and when his brother Richard suggested restoring it to original condition, the seed was well and truly planted.
​All of which brings us to around twenty-plus years ago and the approach of the new millennium in 2000. Greg's 11-year-old son James, helped by cousin Jane, began to strip the Cub down.
​
Luckily Richard enjoys visiting autojumbles, knew just what he was looking for, and the search for genuine parts began in earnest. The idea being to restore the bike with as many genuine and new-old-stock parts as possible. One rather large bonus being he already had a pair of original T20 side panels.
Once fully stripped, the rebuild began with the frame and various cycle parts being despatched to a local specialist for blast-cleaning. On return, Greg set about with a spray gun and twin-pack black paint, suitable attired of course as it's not the most user friendly of paints to use.

​Next was a full engine rebuild, into which Greg put new bushes, main bearings, big-end and gearbox bearings along with treating the cylinder head to new valves, guides and valve springs.
​It was then the project could easily have stalled as unfortunately Greg was made redundant. But undeterred, he continued to hunt down the parts needed to finish the restoration whilst at the same time setting up his own machinery repair business.

Sticking with originality as much as possible, Greg wanted to keep the 17" Dunlop wheel rims and luckily found a 'chromer' who was able to carry out the re-plating whilst still keeping the original marks stamped into the rims. The wheels once fully rebuilt were fitted with period-looking Avon Speedmaster and SM tyres.
​With the black coloured parts painted, it was time to apply the Hi-Fi Scarlet and Silver Sheen finish to the  fuel tank, oil tank and battery/tool box. Greg had found slight differences in the colours of the original Meriden painted parts, so it took some time to determine the correct shade to use. The first Scarlet Greg bought he thought was too dark, so he tried paint from someone else and found it to be perfect. After a base coat of Silver Sheen, he continually layered Scarlet on top until he achieved the correct colour followed by top coats of clear lacquer. 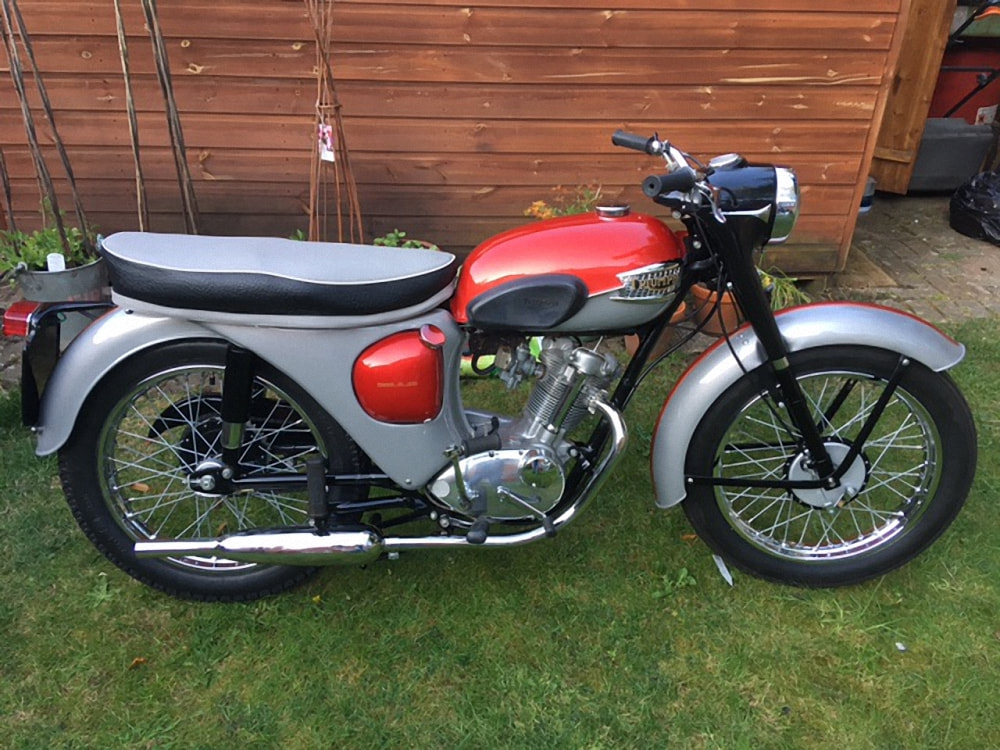 Greg had planned to display the Cub at the TOMCC Berkshire Branch's annual concours event last June (2020). But as we all know, due to the Covid-19 restrictions it had to be cancelled and was replaced with a virtual version. Undeterred, Greg entered his Cub on-line and amazingly won the 'Best Triumph' award!

Greg has owned a number of Tiger Cubs including a 1958 model and a 1961 T20T, the trials-only variant and had this to say, "They're such brilliant little bikes to ride, yet you rarely see them on the road now."