Lightweight Avalanche in the Highlands
Following Ken Heanes' gold medal winning ride in the 1956 ISDT on a factory prototype twin-shock framed Tiger Cub, a T20C 'Competition Cub' based on that machine appeared in Triumph's 1957 sales brochures.

It was the first production Tiger Cub model to come out of the factory to really emphasise the off-road competition capabilities of the machine, and it certainly got the attention of the public.

At last here was a machine that may well be able to take on and beat the then traditionally accepted larger-engine trials bikes that had been the mainstay of competition for many years...
​...and it certainly didn't disappoint! Over the following years Tiger Cubs took established stars to literally dozens of national and trade supported trials wins along with innumerable club-level wins by ordinary riders just out for a day’s sport.
​Motorcycle trials started in Great Britain over 110 years ago back in the 1900's, although it's doubtful anyone actually knows the exact date of the very first event.

Not about speed, it's a test of riding skill, balance and concentration over observed sections which can contain rocks, boulders, steep slopes (both up and down), mud, streams and gullies.

​Competitors must navigate the sections without putting their feet down or 'dabbing' as it's known. For every dab a point is added to their score, meaning the rider with the least points at the end of all the sections is the winner.

Most trials are one-day events, but a few stretch over a number of days and it's widely accepted the Scottish Six Days Trial (SSDT) is 'The One' to win. Held in the Highlands of Scotland the SSDT is run over six consecutive days with competitors riding anything up to 150 miles in one day and sometimes more.
At the end of the day the lead had been taken jointly by Roy Peplow (200 Triumph) and A. J. Lampkin (250 BSA) with a total of six marks lost.
In second place was G. L. Jackson (350 A.J.S.) 7 marks with third placed men Ray Sayer (200 Triumph), J. V. Brittain (350 Royal Enfield) and Sammy Miller both on nine.

Manufacturers Teams - A.J.S. 33; Triumph 34; James 53.
​The fifth day's route was only 66 miles long with 33 sub-sections, nearly half of them on the long Loch Eild Path climb which snaked its way over a boulder-strewn gulley overlooking Kinlochleven.
​
A night of heavy rain had made the terrain interesting as all eyes were trained on the Jackson-Miller-Peplow-Sayer struggle for supremacy.

As the day wore on the four riders approached the last few sections. On the 'L'-shaped last "sub", deemed one of the most difficult in the trial, a steep rock step worn away on the inside awaited the riders.

Cubs Sweep the "Scottish" proclaimed the headline in 'The Motor Cycle'. The most arduous event in the British trials calendar is the famous Scottish Six Days Trial, a thousand miles of rocky mountainous tracks in the Highlands.
Held first in 1909 - and won by a Triumph* - the 1959 event marked the Golden Jubilee - and it was again won by a Triumph, a Tiger Cub.
* That first 1909 event had been jointly won by H H Salvesen and S J K Thomson both riding 3.5hp Triumph machines.

Tiger Cubs in fact finished first, fourth and seventh, winning the Premier Award (Best Solo), the Manufacturers' Team Award and the 200cc class  - a clean sweep. The winning rider was Roy Peplow and his team mates were Ray Sayer and Arthur Ratcliffe. The latter is seen in the picture above negotiating the notorious Loch Eild path while the ultimate winner, Peplow, on the right, watches him intently.

Not only that, Peplow had become the first person ever to win the coveted J. R. Alexander Challenge Trophy* on a machine of under 250cc.
​*The J.R. Alexander Challenge Trophy as mentioned above was donated to the Edinburgh club by the Edinburgh Ford main dealers, whose chairman’s son Henry was the man to have driven a model T Ford car to the top of Ben Nevis (and back down again).
Starting on 9th May 1911, it took then four days to ascend and a further five to descend. A fantastic publicity stunt for the Ford Motor Company at that time!

And to put the icing on the Triumph cake, Peplow, together with Arthur Ratcliffe and Ray Sayer on their Cubs - three of only seven men to lose less than 40 marks - took the Blackford Challenge Trophy for the best performance by a manufacturers team. 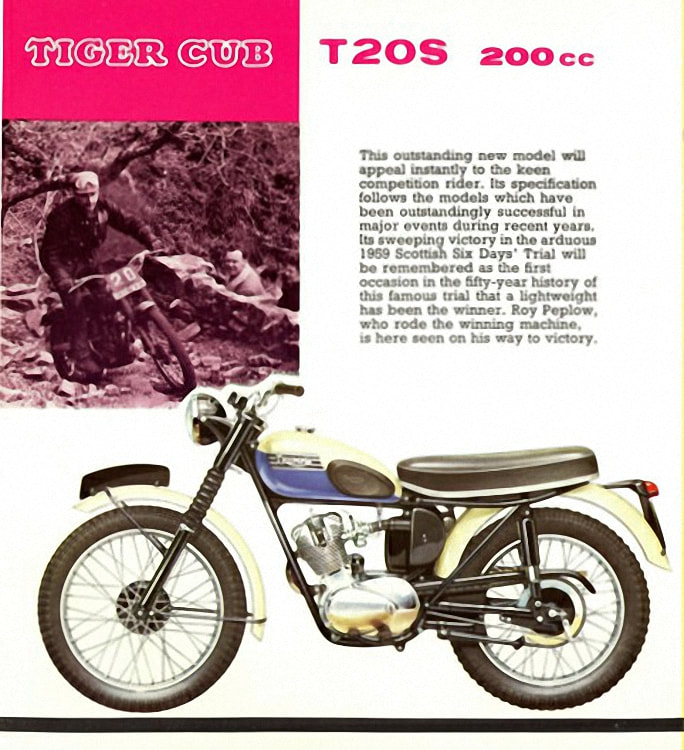 ​Given the success the Tiger Cub was having in the field of sporting and competition events worldwide, a new model, the T20S was released in 1959.

Further building on the formula of the T20C model, the T20S (Sports Cub) was to change people's perception of lightweight motorcycles and set a trend that's still prevalent today. Lightweight go anywhere trail, off road and adventure bikes.