...Back in the 50's the Earls Court Motorcycle and Cycle Show was the place motorcycle companies debuted their new models and the Triumph Engineering Co. Ltd. always made sure it had a grand display. The 1952 show held in the November of that year was opened by the Duke of Edinburgh with stand No.28 displaying Triumph's finest, and a totally new model was to be found on display, the T15 Terrier. 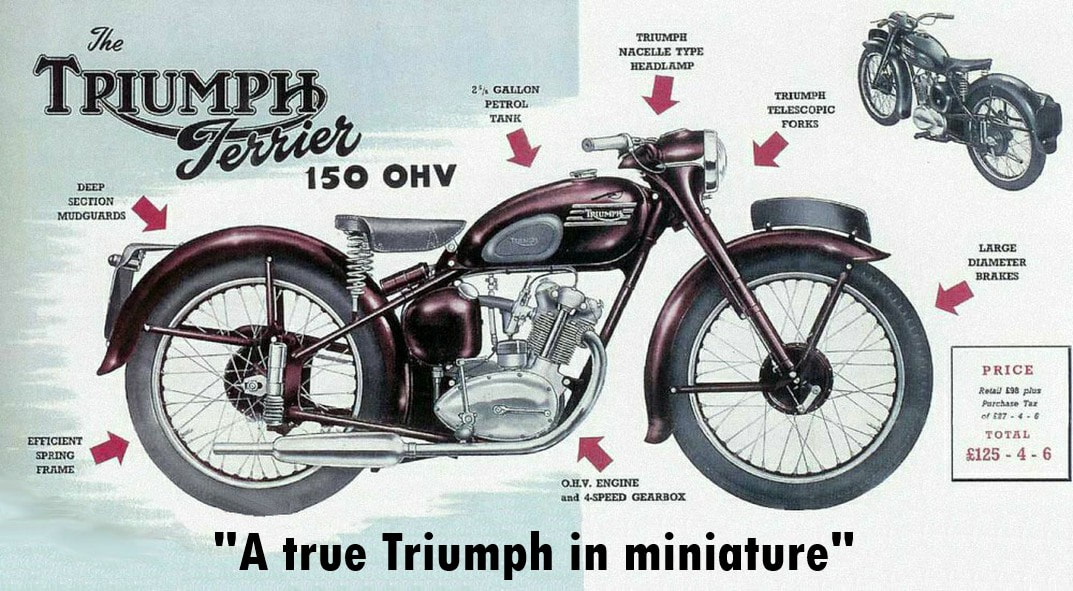 ​The first anyone outside of Triumph knew about the Terrier was when, just a few days before the show was due to open, the company announced the new machine would be on their stand; and with a tag line of "A true Triumph in miniature" and its Amaranth Red paint scheme and nacelle, it did indeed look like a smaller version of one of the company's most famous machines of the time, the Speed Twin.
To further publicise the new machine and to demonstrate its reliability and show its miserly fuel consumption, a publicity stunt that soon earned the nickname "The Gaffer's Gallop" was dreamt up. Three people from the factory were to ride new Terriers taken straight off the production line from Land's End to John o'Groats, calling in at as many Triumph Dealers as possible on the 1000 mile journey whilst at the same time averaging 30mph and 100mpg!

Those riders were to be Triumph Directors Edward Turner, Bob Fearon (Works Director) and Alex Masters (Service Manager). The resulting press handout declaring "The man who designed it, the man who made it and the man who will service it".
​
Accompanied by an ACU observer the test officially started on Tuesday 6th October 1953 with the three riders successfully arriving at John o'Groats on Saturday 10th October. 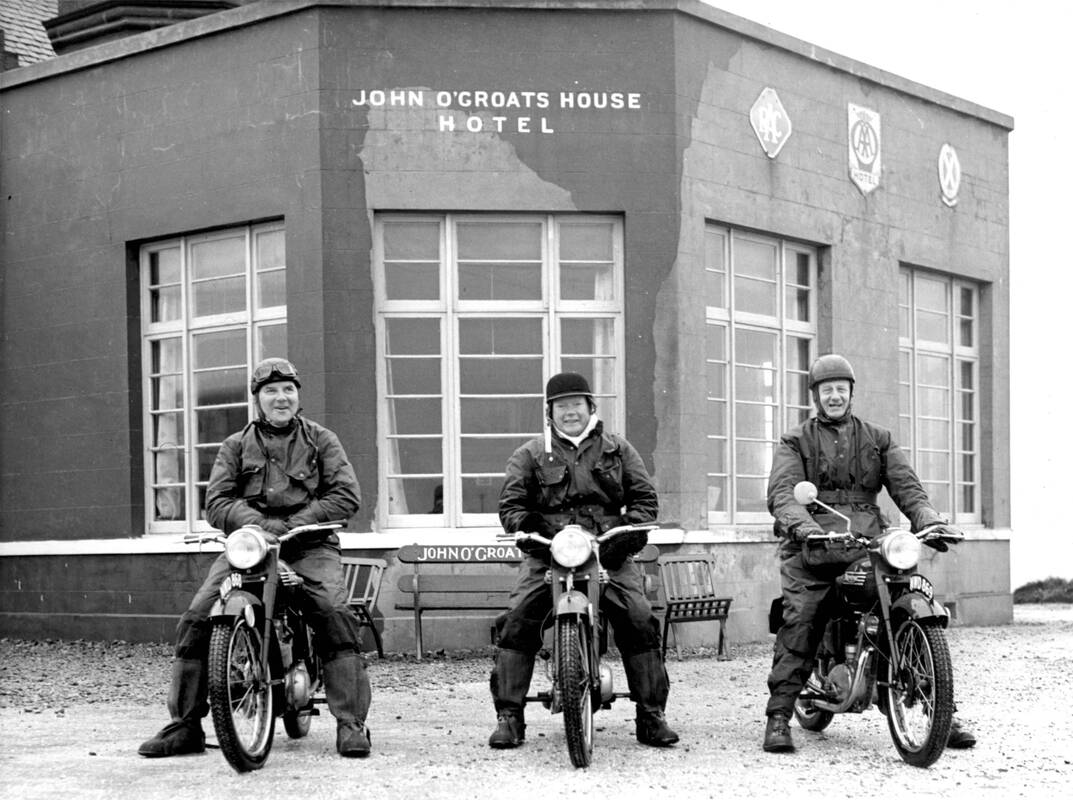 ​Performance figures for the trip (remember no motorways in those days) showed an average speed of 36.68mph and 108.6 miles per gallon over the total of 1008 miles!
Once the machines were returned to the Triumph factory, and in front of the same ACU observer who had followed "The Gallop", they were stripped and inspected. The demonstration certainly showing Triumph's new Terrier was capable of astonishing performance and fuel consumption. As a result, dealer's order books for the machine were full to overflowing for the next 12 months.
​The larger engine gave around a 10mph increase in top speed with no noticeable loss of economy and the factory press release stated:
'The "Tiger Cub" answers the demand of the lightweight enthusiast for a high performance model which will more than hold its own in any company, yet at the same time be economical to maintain and run. Beautifully finished in Shell-Blue sheen and glossy black.' 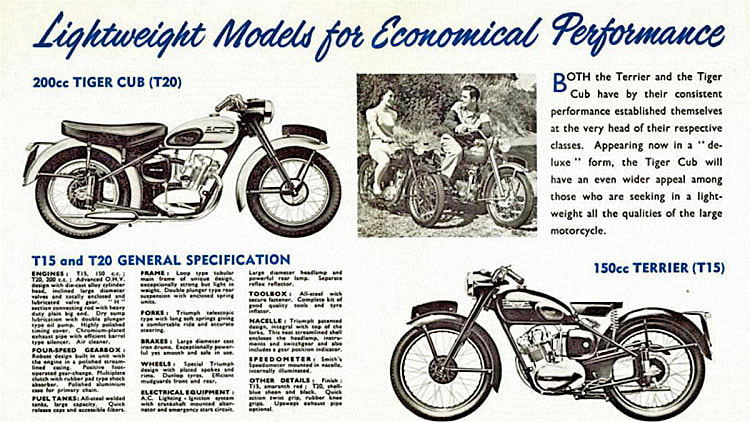 Both the Tiger Cub and Terrier  shared the same advertisement as: "Lightweight Models for Economical Performance".
​Saviour for those neglectful ones came in the form of a new design frame with swing-arm suspension for the 1957 season.
​Production of the Terrier came to an end with the closing of the 1956 year. From now on it was to be the Tiger Cub in its many forms that would be the backbone of Triumph's small capacity machines and it developed into what could well be described as Triumph's greatest and most successful motorcycle of all time. 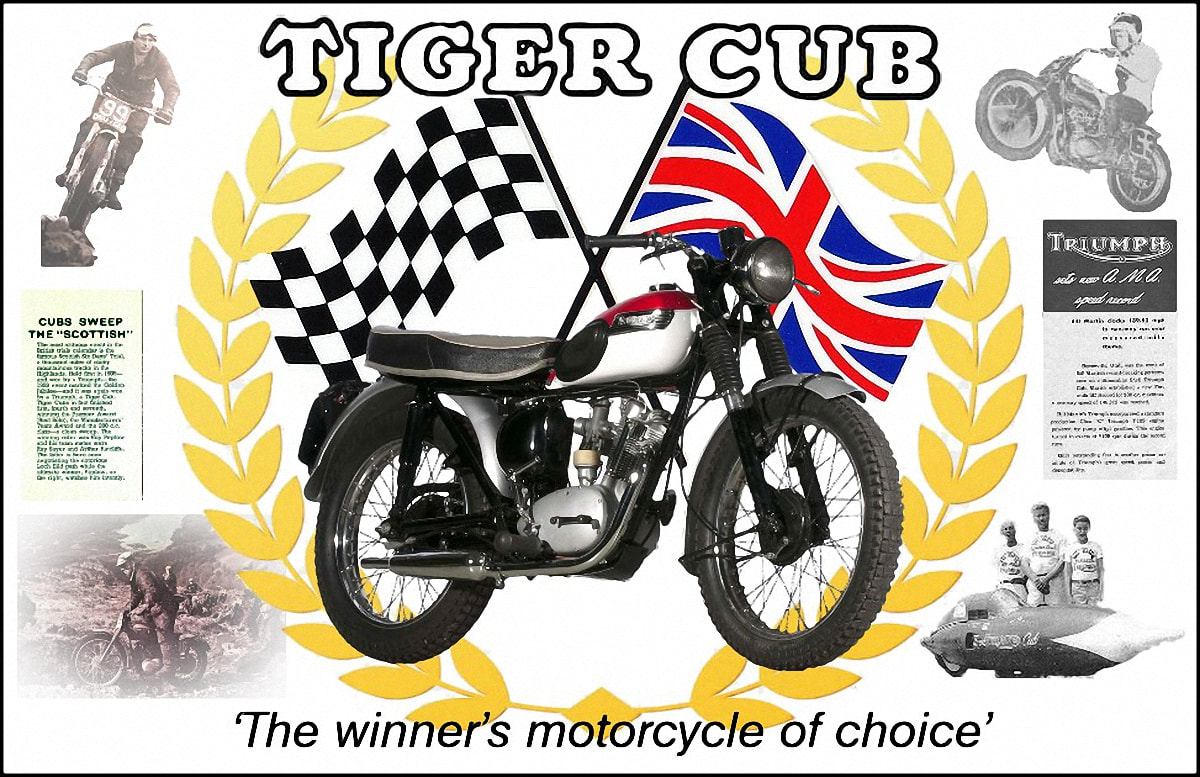 A bold statement indeed, yet no other Triumph model has competed and won in International Six Day Trials, off-road enduros, desert races, hill climbs, sprints, flat track, short track, grass track, scrambles, speedway, trials, road racing and even ice racing.
​
It was a 199cc Tiger Cub that took a World Speed Record at Bonneville Salt Flats with a two-way mile speed record of 139.82 mph including a one-way run of 149.315 miles per hour, and to this day Tiger Cubs are still winning premier international trials events. 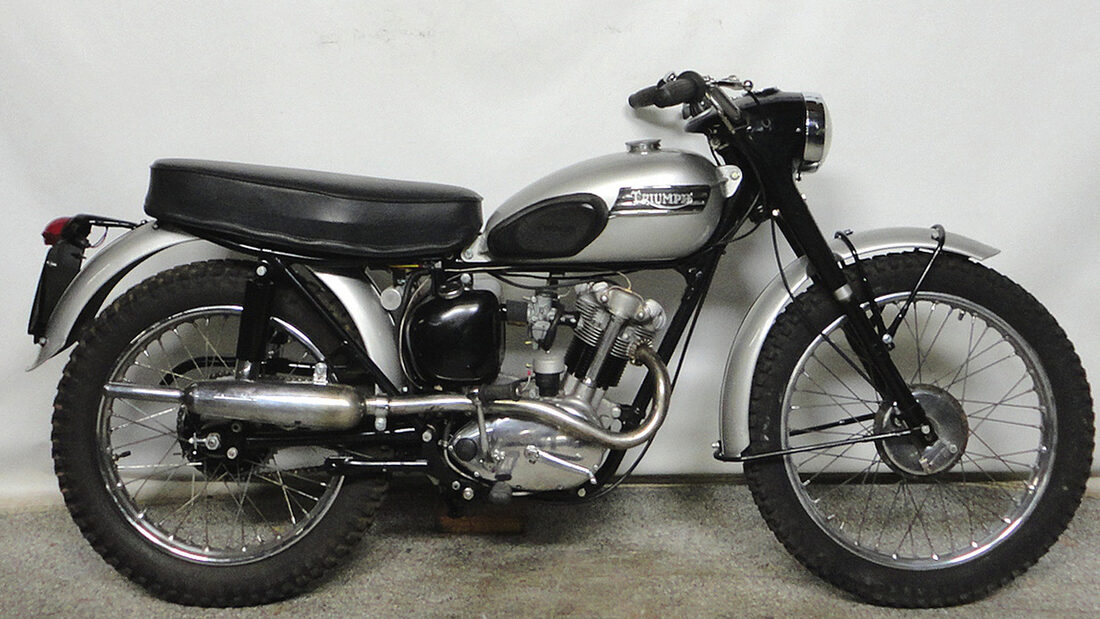 ​This model was the first to really emphasise the sporting pretentions of the Tiger Cub and set a trend that was to stay with Triumph's lightweight machine until the end of production in 1967.

During those years, Tiger Cubs were despatched to 153 countries around the world, with the most important market undoubtedly being that of the USA. A fact also true for the larger Triumph machines and by the end of 1964 the company was struggling to keep up enough production to satisfy the market. In order to increase capacity for the manufacture of the larger twin-cylinder models Triumph's parent company BSA, made the decision to move Tiger Cub production from Meriden to its Small Heath plant in Birmingham and by February of 1965 the whole Tiger Cub production line had been moved there.

To say this was an unpopular move would be a massive understatement. Triumph/BSA rivalry was rife between the factories, something the BSA management appeared unable (or didn't want) to understand. Engines, frames and cycle parts continued to be built at Meriden before being transported over to the BSA plant and by the August of 1965, Tiger Cubs were rolling off the ex-Meriden/now Small Heath production line.

Exactly when production of each of the different models finally ceased, the T20 Tiger Cub, T20SH Sports Cub, T20SM and T20M Mountain Cub and the T20M.WD military model is unclear as available Factory records show the engine number column changes from being the engine number to being a date. This may indicate either the engine being manufactured or the machine itself being manufactured. After such a long time it's now extremely doubtful whether the exact date of production ceasing will ever be determined, although it is known delivery of machines carried on into the 1970's.

However BSA had other plans for the Tiger Cub.
​T​he new machine's colour scheme was Nutley Blue and Alaskan White. It was a good machine, but due to marque rivalry between Triumph and BSA enthusiasts, it was popular with neither. Something the BSA management seemed unable to understand as yet another announcement followed for the 1967 season. A Super Cub utilising modified D10 Bantam frame and cycle parts.