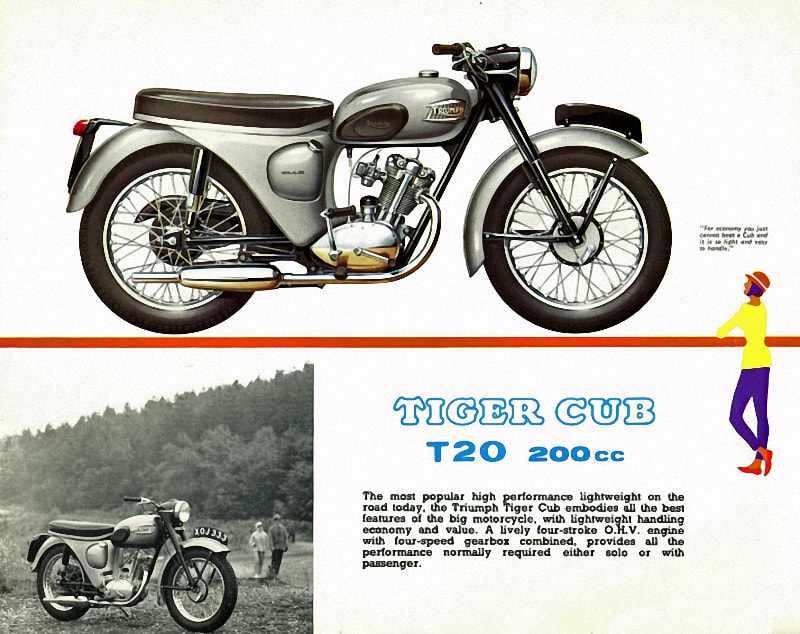 ​If 1959 had been all about a major cosmetic restyle, the Tiger Cub of 1960 was mainly about engine improvements.
​
A new 'big valve' cylinder head had appeared with a larger inlet valve and port to help the engine breathe easier. It had been common practice among Cub engine tuners for a number of years and now it was a standard feature. In addition the exhaust port had been moved round by seven degrees, one advantage being the finned exhaust clamp could now be fitted without having to resort to removing the engine locating bolts in order to tilt the engine upwards giving sufficient room to complete the procedure.

Another handy modification was the use of shorter barrel studs, which along with a deeper counterbore in the new design cylinder head and the use of longer cylinder head nuts, enabled the head to be removed with the engine in situ.
It wasn't just the top end of the engine that had come in for improvement. A new two-piece crankcase had also been introduced that gave the engine far more rigidity than the one-piece item fitted so far. To go with the new crankcases and to clean up the overall 'look' of the engine, the contact breaker assembly received an internal clamp replacing the previous external one and new design primary and timing covers completed the external transformation.
Internally a new larger capacity oil pump was used and a new slotted timing side bush carrier allowed oil to bleed through to the skew gears.
​
To complete the 1960 T20, wheel sizes increased to 17 inch with a corresponding reduction in gearbox sprocket and the swing-arm changed to one that was wider at the front as per the trials machines.

No change to colour schemes for 1960 and Crystal Grey and black livery (UK and other markets) and Aztec Red and black (USA) continued.

The T20J Junior Cub of 1960 again mirrored all the changes to the standard T20 Cub except for the fitting of a 9.5mm Zenith carburettor.