Gold at the Olympics 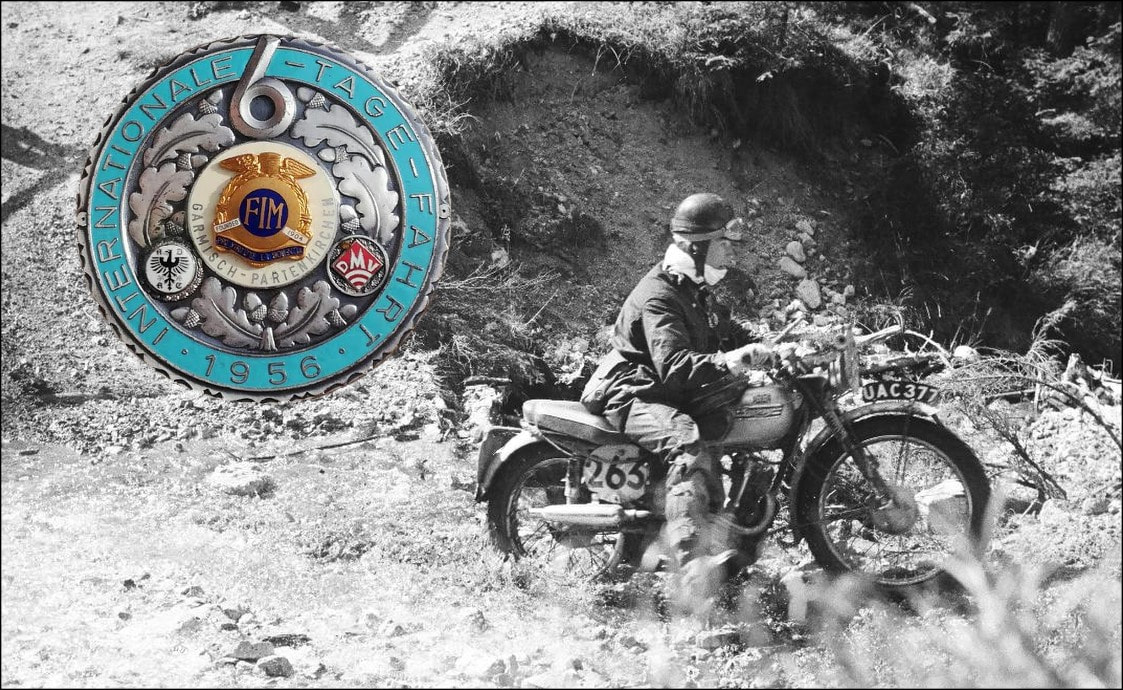 ​But first a little bit of history.
The place was Carlisle on the border of England and Scotland, the date was the 18th August 1913 and the first ever International Six Days Trial (ISDT) was about to start. Taking place over the next six days; this reliability trial was open to motorcycles, motorcycles with sidecars and three-wheeled vehicles. Different national teams were to compete for the Trophy on vehicles that had to have been manufactured in their respective home countries. To win, competing teams had to cross the finish line with as many team members as possible after six days of gruelling competition.
​
A change in regulations in the mid-1920s stated that for countries without indigenous motorcycle manufacturers, their teams could compete for the 'Silver Vase' with the awards now consisting of Trophy and Vase team awards together with Gold, Silver and Bronze medals to individual riders. Another rule change in the late 1940s stipulated it had to be five-man teams who would now compete for the Trophy and teams of three competing for the Silver Vase. Then for the 1956 event, the FIM decided to increase the difficulty level with Trophy teams having to consist of six members and Silver Vase teams of four members. Not only that, every member had to reach the finish line after six days with no outside help in order to be ranked.
Enter Ken Heanes...
It was 1950 and at just 16 years of age, Ken Heanes competed in his first ISDT as a private entrant. Over the next couple of years he caught the eye of Triumph's Ivor Davies and by 1954, Ken had become a Triumph 'works' rider competing on their twin-cylinder machines, winning prestigious scrambles meetings both at home and abroad. 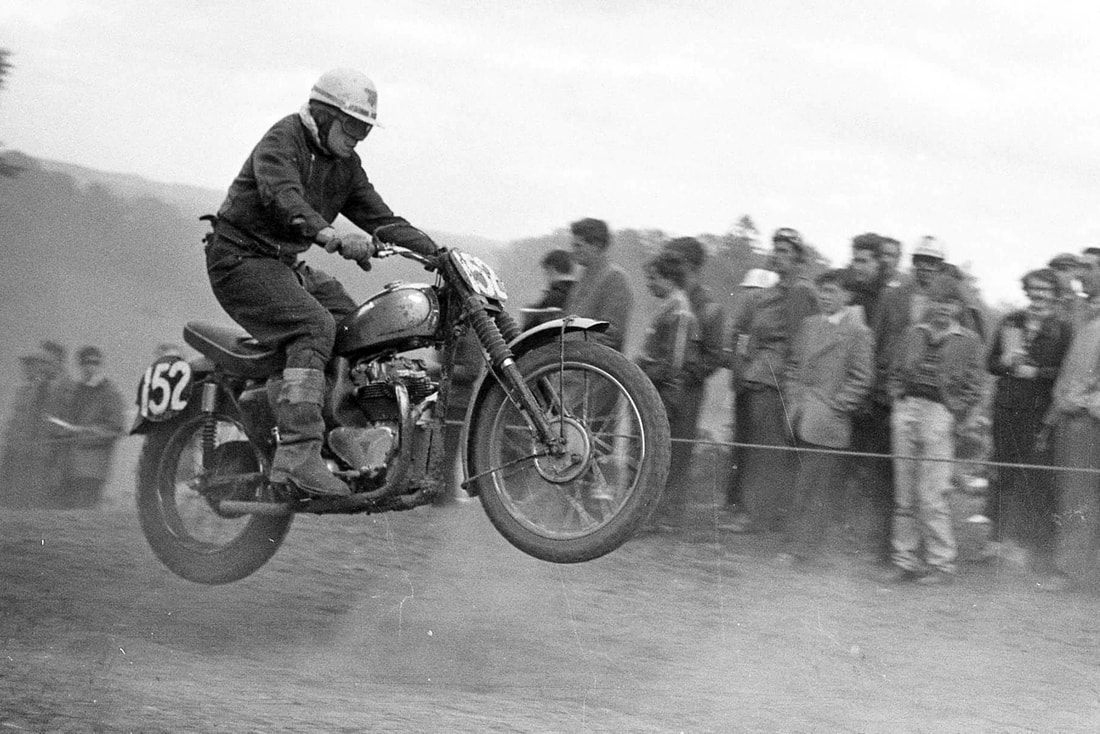 ​That first foray into the ISDT world though unsuccessful (he was on a semi-works Royal Enfield 350 Bullet and was still 'clean' after three days of competition until shortly before the final check point of the day when he picked up a rear wheel puncture that left him just 10 minutes the following morning to effect repairs - removing/replacing the non QD wheel and replacing the tube. Ken practiced tyre changing late into the night and in the morning managed to replace the tube and sped away, but trying to get back on time he crashed into a wall extensively damaging the front of the bike and had to retire), had wetted Ken's interest in the event and he was keen to make a return. His ambition was realised with the 1956 event, but what came as a surprise was the bike he was expected to compete on!

A couple of years earlier, Triumph had released the new Tiger Cub model and was now keen to fully demonstrate its off-road potential. But as there was no specific 200cc class (it was either the 175cc or 250cc class) the factory built a number of special 175cc engines using a piston from their 3TA twin-cylinder model into specially bored Cub barrels. The other notable feature of Ken's machine was it had twin rear shock absorber swing-arm suspension.

(Images below courtesy of Mike Estall​)
​Henry Vale from Meriden's competition shop had built a prototype rear swing-arm Cub for George Fisher to ride in the 1956 Scottish Six Days Trial, but after a week's practice on the machine he had gone down with food poisoning and it was Bill Faulkner who took over the ride. His instructions from Henry Vale were quite clear. Bill was told in no uncertain terms "I don't care what you do, blow the engine up or whatever, but don't break the frame, it's the only one we've got and we're putting a 175cc engine in it next week for Ken Heanes for the selection tests at the Welsh Three Days". Extremely important as the Welsh Three Day event was used by the Auto Cycle Union to select riders for the ISDT.
​
All was well until the last day when Bill fell off. Undeterred he remounted and carried on to the finish. However perhaps more damage had been done to the frame than he realised at the time - but more of that later! 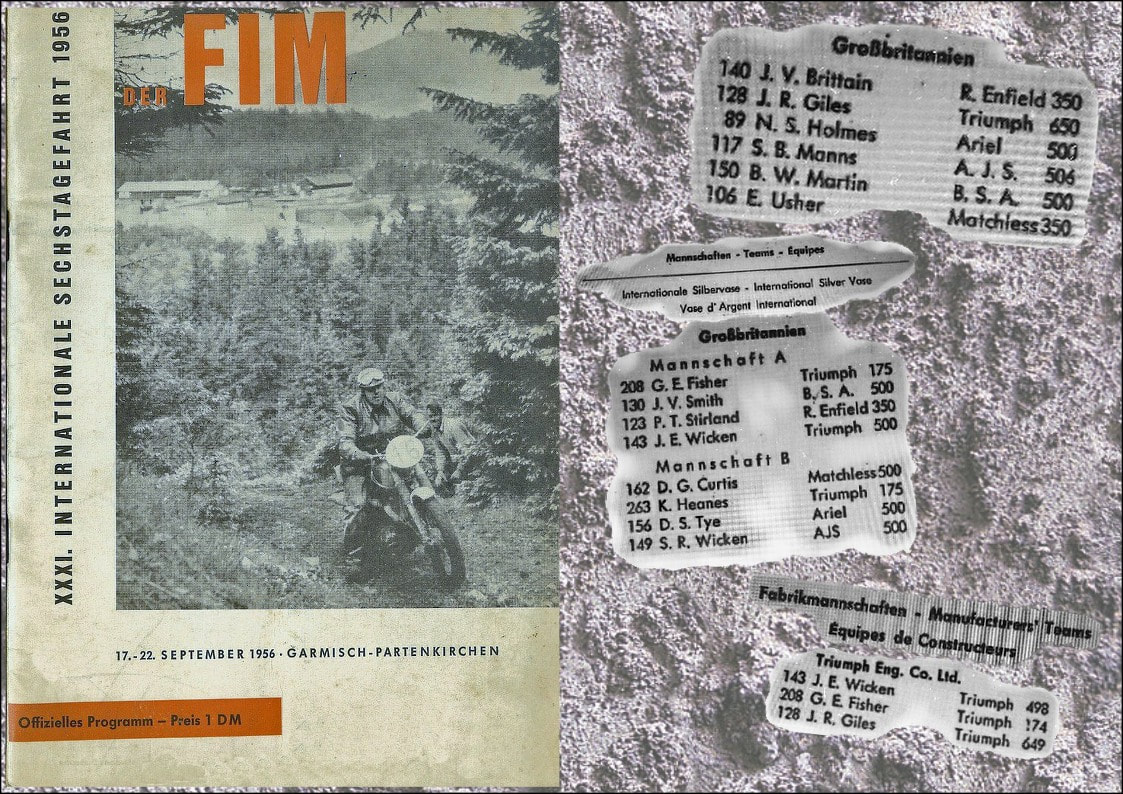 ​The 1956 ISDT was based around the West German town of Garmisch Partenkirchen and proved to be a particularly tough event with just 111 riders and machines making it to the finish line out of 313 starters.

There was a total of three 174cc Tiger Cubs in the event - G. E. Fisher (No. 208), K. Heanes (No. 263), and D. G. Andrews (No. 268) riding for the Ireland Team.
Going for Gold
From the start Ken had to ride the Cub with the throttle flat to the stop and by the first check point it was suffering from a partial seizure. A tin of Molyslip in the oil tank worked wonders, freed everything up, and Ken carried on with the throttle wound wide open once again. 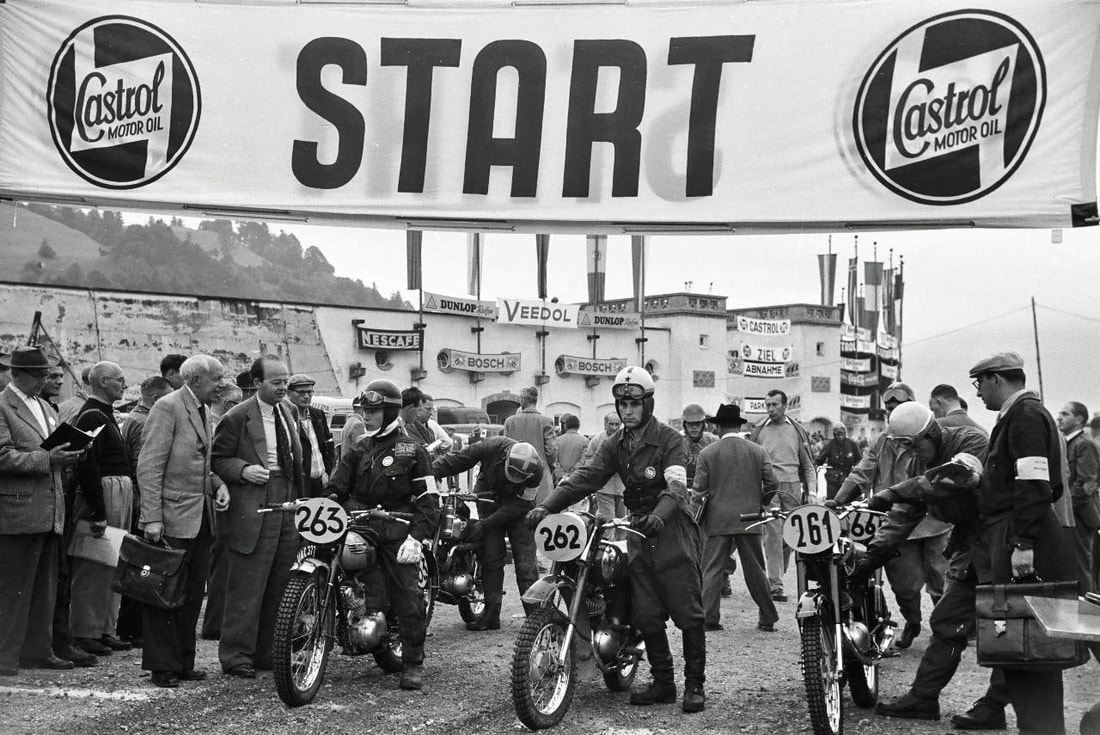 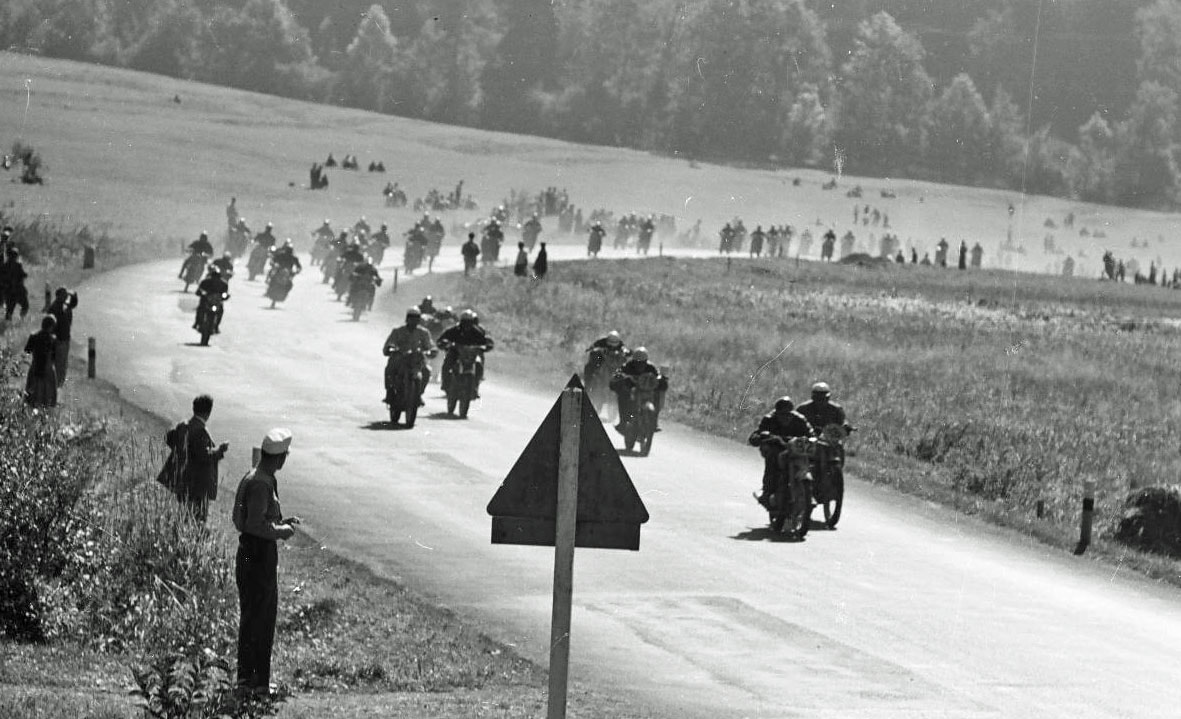 ​Day five, the Cub's battery exploded but still the baby Triumph kept going, meaning the only thing standing between Ken and the Gold Medal was the final day's speed test.

For this, machines in the 175cc class had to average something around 56mph and despite being ridden virtually flat out for six days, Ken and his Tiger Cub had kept going. 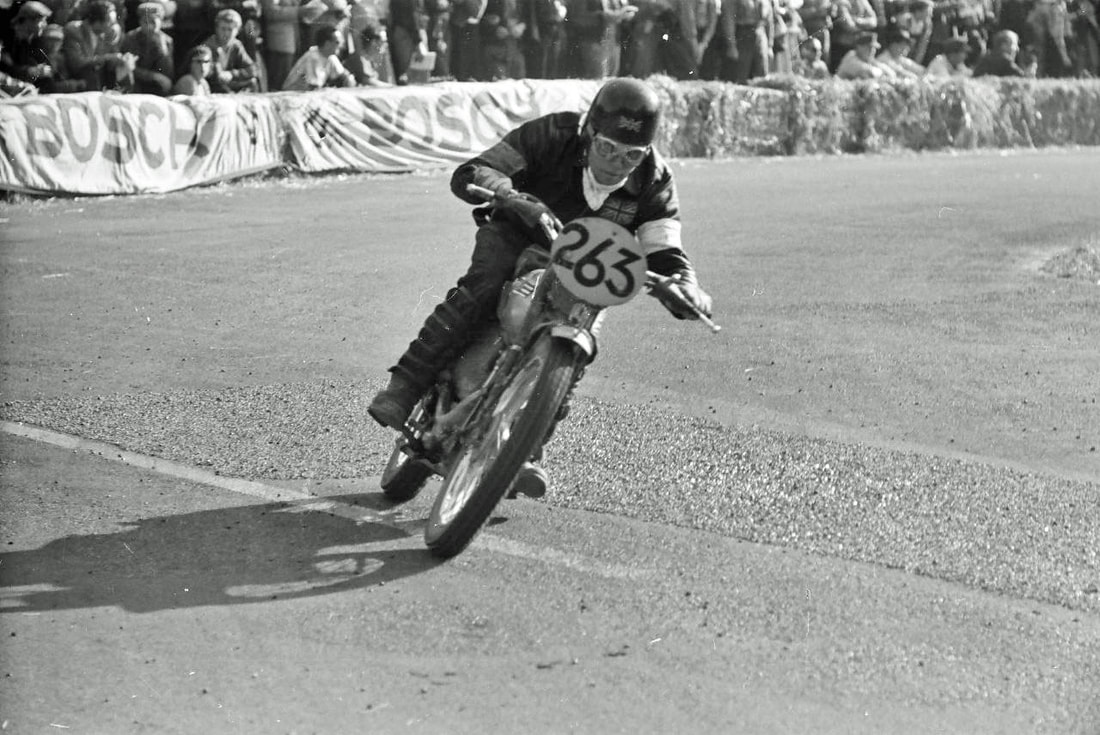 ​As he raced to the finish line throttle still to the stop, the engine of his Cub finally expired.
​With Triumph's competition manager Henry Vale watching, Ken coasted over the line to win his Gold and start an incredibly successful ISDT career that would eventually see him amass a total of ten gold and two silver medals.
​
(All images, unless otherwise specified, courtesy of the Technisches Museum Wien, Austria.)