Project - 1956 Terrier with 1958 Cub motor
“[Practical know how] can’t be downloaded, it can only be lived.”
Bottom End of the Triumph ’56 Terrier - Overview Of The Oil Delivery System
A few weeks ago, our group conducted a test to ensure that the oil pump assembly was working properly. The test consisted of stripping the engine case of parts except for the oil pump and oil line, and inserting a mock distributor, which was attached to a power drill.

The drill spun the distributor, which in turn powered the oil pump. Oil was then inserted through the input oil line. A positive test occurred if the oil was sucked through the pump efficiently.
The first few tests were unsuccessful. This was because the interior of the oil pump was dirty, clogging one of the ball bearings. We disassembled the entire oil assembly, cleaned it, and then rebuilt it.

After this the test was successful.

The pump has two pistons, one large and one small. The smaller is the feed plunger, and oil goes from the oil tank to the feed plunger, initially pressurized by gravity alone. The feed plunger’s smaller area means that it pumps a smaller volume of oil. However, it pumps at a higher pressure than the larger piston. This is because pressure = force/ area, so reducing the area increases the pressure.

The scavenge plunger pumps oil from below the scavenge filter, which is below the crank, and then goes through the pump and back up to the oil tank. The scavenge plunger is larger because it’s primary purpose is to pump out all the oil that it can. Having a larger diameter cylinder results in a greater volume of oil pumped, but at the cost of lower pressure. However, the force only needs to be high enough to pump the oil to the oil tank.
​Meanwhile, Glenn 3-D printed a rapid prototype of a throat to connect the carburetor to the head. We learned that the stoichiometric ratio of air to fuel necessary for combustion is 14.7:1
We also used the ultrasonic parts cleaner to clean the intake and exhaust springs and washers. We then went on to measure the spring constant for each of these springs.
Special thanks to Nigel for his insight and knowledge which helped us greatly in understanding the mechanics of the top end and engine as a whole!!
​
We recently completed sandblasting the head. From there we ground the valves using a lathe and grinding wheel and re-cut the seats on the newly sandblasted head.
Gaskets & Creo - Cad In Motorcycle Restoring
by MGM

Gaskets, in the case of our motorcycle, are seals that are placed between the metallic surfaces of the engine so as to prevent oil from leaking. They are generally disposable, so we make our own so that they might last longer and be of a desired quality.

By working on Creo Parametric 2.0, CAD software, gaskets were created to exactly fit the dimensions of our motorcycle’s crankcase. First, the holes for the bolts on the crankcase were each assigned an (x, y) position on a coordinate system, so that they could be arranged in the coordinate plane in Creo. Then, their diameter and the width of the metal were all taken and used to give dimension to the gasket.
Finally, after many adjustments to accommodate the exact shape of the crankcase, the gaskets are ready to print. Two were made.
Transmission
Ben And Kirk
Roles of the transmission: The spinning motion from the engine comes into the main shaft (top shaft in the picture) via the clutch, which it is connected to. The gears on the main shaft then spins the layshaft, which in turn spins the right most gear on the main shaft, which actually spins independently of the main shaft. This gear is connected to a sprocket which spins the rear wheel via a chain.
​This graph represents the gear ratios in the format of engine RPM vs miles per hour of the motorcycle. 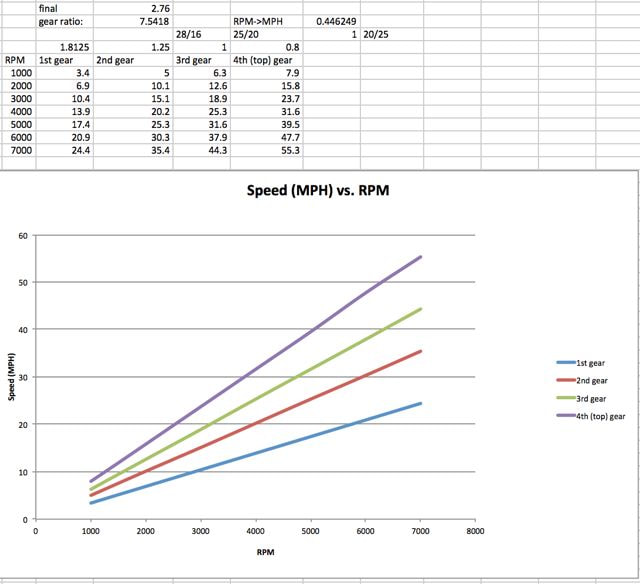 ​The spark advance is a mechanism in the electrical system which adjusts spark timing in the engine, adjusted based on RPM, in order to get the most efficient combustion.
The spark advance uses spring force and centripetal force, attained through rotating weights, to contract the spark advance gap and adjust the timing. Improper timing could cause engine damage among many issues.
Frames, Forks and Wheels
by Haydn, Adam, Emma, Eliza, Hilary

Emma and Eliza - When we started, the fenders were painted but in rough shape. Both of them had rust on their surface, and needed work. First, we used Scotch Brite to get the rust off and scuff up the existing paint so that the primer would stick. After that we did the same thing but with dry sandpaper. Then, we used wet sandpaper of a finer grain.

The wet sanding allows the dust particles to remain in suspension so that they don’t stick to the fender. Then we used a heat gun to dry the fenders before priming. We did a few thin coats of primer in order to avoid drips. We finished priming the fenders (and suspension forks) and are now waiting to take them to the paint shop.

Haydn, Hilary, and Adam - We started out in different areas, but ultimately accomplishing many of the same things. Most of our jobs included monotonous cleaning of different frame-related pieces with machines such as the sandblaster and parts cleaner. Main pieces that were sandblasted include the nacelle, hubs, gas tank, forks along with other small pieces.

Haydn spent a lot of time de-spoking one of the hubs from an old wheel to salvage the hub. This was made harder by the condition of the wheel and our lack of a spoke wrench.
We also applied bond-O to the gas tank and nacelle to smooth out and solidify their structure.
After lots of hand sanding and priming both pieces are coming along nicely.
Wheels and Spokes - Disassembling
We began with two wheels that were extremely worn out and had rusted spokes. We wanted to use the hub from the wheels though, so we had to de-spoke the entire thing in order to get the hub out.
We bought entirely new spokes and rims.
​One problem we had with de-spoking and re-spoking was that the spoke wrenches we have aren’t the right size for the nipples on the spokes for this bike. It made tightening and loosening everything a little bit challenging.
​A problem we did have was that when we put the ball bearing in on the rear wheel, we accidentally did not have it lined up perfectly. It was slightly tilted, so that when we tried to put the wheel on the bike and spin it, it would get stuck. We had to hammer the ball bearing out and set it carefully back in.
​Putting the spokes in the right holes is challenging just because they all look the same. We had to take them out and put them back in a few times before we got it right.
​Wheel Offset
One thing to remember when tightening the spokes on the rear wheel is the wheel offset.
Because the chain attaches to the sprocket on the rear wheel, it is important that the hub is just the right distance from the rim or else it won’t fit when you try to put the bike together.
We created a tool to measure this offset before we tightened the wheels. 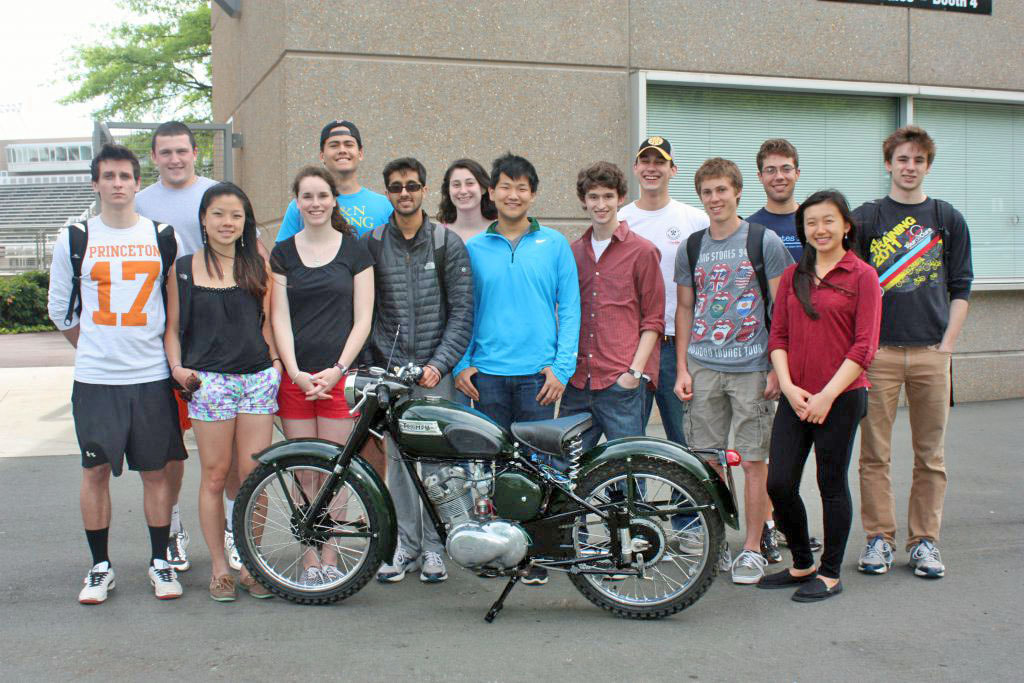