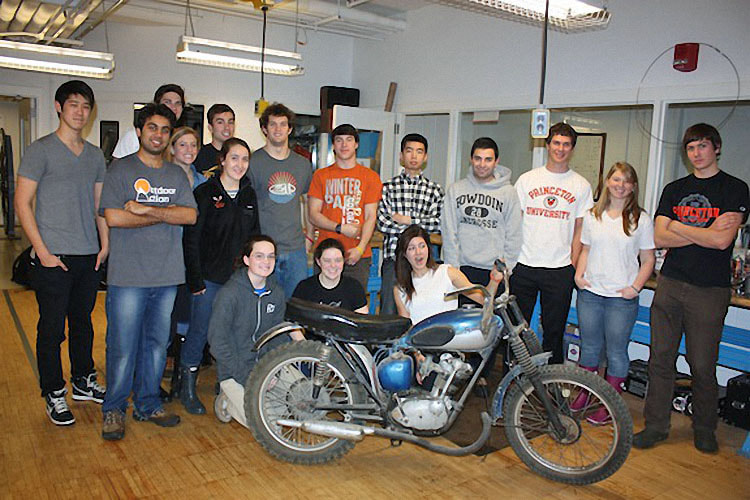 ​In problem determination, first a hypothesis of what the problem could be and potential causes are made, then checked and tested in an attempt to solve the problem.
​Here, the motorcycle is shown being taken apart. There was speculation as to whether the oil pump was working, since no oil was flowing into the oil tank.
​The TRANSformation
Here is the change in appearance of the transmission. Shown on the left is a picture of before we started or touched anything, and on the right is a picture of our transmission cleaned and with some worn parts replaced.

Before we started working on the transmission, the transmission was coated with a gritty grime, and much scrubbing and scraping of the parts and cover was needed to restore the transmission to “like new” condition.
​
Some other things we did within the transmission included making and putting in new gaskets and seals, and replacing worn parts such as the metal square that engages the kick start.
​Why does the clutch have multiple plates?
Having multiple plates increases the friction, thus reducing the slippage. The greater the friction, the greater the torque that the clutch can handle without slipping.
From there, we can calculate the amount of initial compression required when each spring is screwed in to generate this amount of force so that the clutch will slip at 50ftlbs. of torque.
​
F = kx
13.53lbs. = (1143lbs./ft.)(x)
x = .0118ft.(12in./1ft.)
x = .142in.

So given torque, we were able to find the force applied by the springs and the distance we need to compress the springs initially to generate this force. On the other hand, if we assume a certain amount of compression in the springs, we could also find any torque.
The honing tool is also used to create tiny vertical grooves in the cylinder wall, allowing oil to move vertically in the cylinder. If the grooves from the boring were left in oil would only move in a spiral fashion, and the cylinder would be ineffectively lubricated.

The piston rings have gaps in them for two reasons. The first is to allow room for expansion, so the rings can expand when they heat up and not bend.
The second is to allow oil to move throughout the cylinder. The tiny gap allows a miniscule amount of oil through to lubricate the walls.
​
Too large of a gap will decrease compression, while too small a gap can cause the rings to bend or snap, or the engine to overheat due to lack of lubrication.
​Cylinder Head
We decided to make new guides with Glenn’s suggestion and used some bronze bar stock that was in the shop.
​
We drew up the dimensions of the old guides on Pro-Engineering, but enlarging them so we could drill a new hole for them to seat in rather than hoping they would fit nicely into the old spot, which was probably worn.

They are also longer than the old ones, and have closer tolerances, which means the valves will move more precisely.
The valve seats had to be re-cut, and we decided to do a three angle valve seat. The purpose of the seat is to form a surface for the valve to seal against during the compression and combustion stroke, so that the cylinder does not lose compression.

If it does not seal, expanding gases will escape around the valves, lowering our efficiency and probably causing damage in the head.

A three angle valve seat is a popular method for higher performance engines. The idea here is to create a small, uniform ring at the correct angle to form a seal against the valve.

If the area of the seal is too large, the valve will not form a good seal. If it is too small, there will be a good seal but the metal will overheat, warping and damaging it and the valves.

​The happy medium is made using three cutting tools, each with a different angle.
Once the correct seat was established, we lapped the surfaces to match exactly with the valves using a grinding compound, which was placed on the mating surface of the valve.
​
The valve was inserted into the correct position and spun, first by hand with coarser grit and then with a drill with fine grit. 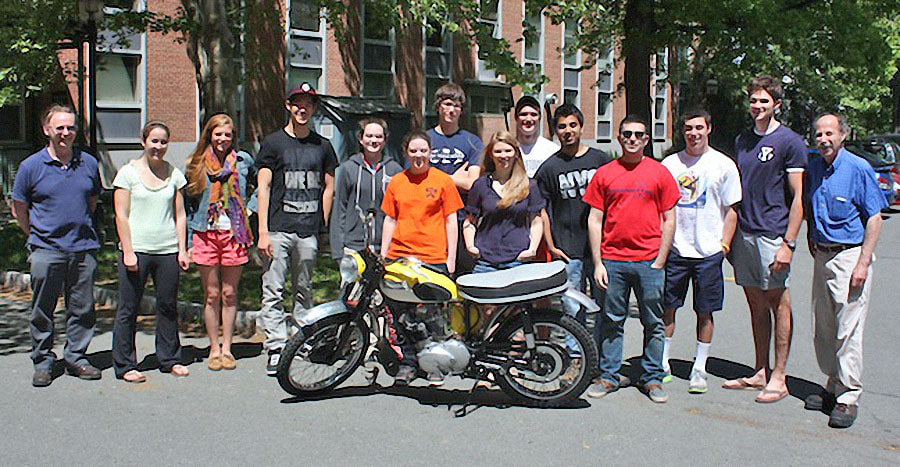