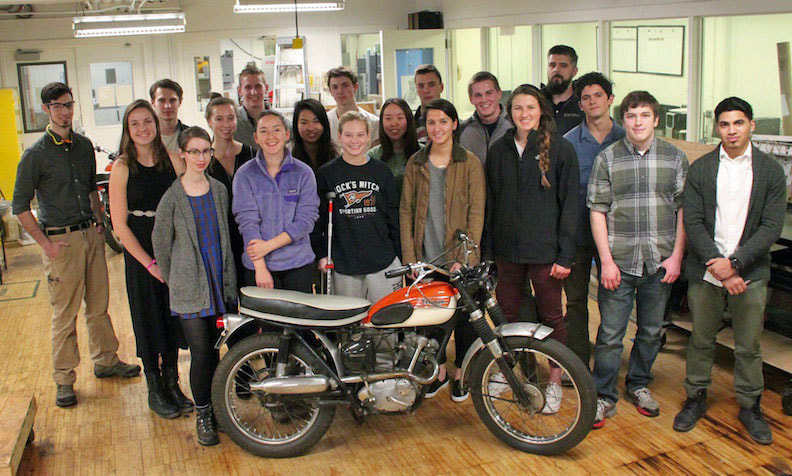 Strip down
​We, as the frame team, began with disassembly of the frame of the bike and parts attached to it. After all the parts were taken off, bagged, and categorized according to the Tiger Cub manual diagrams, we inspected the larger parts of the frame.
​In order to help us look for cracks or damage, we cleaned the parts with citrus degreaser and Yield spray. We also sandblasted the important frame parts in order to take paint off and expose the joints. Then, after being inspected, the frame pieces were sent to the powder-coater in order to be given a smooth, shining, and strong finish.
​While we waited for these parts, we continued to clean other parts. In addition, we buffed and polished the engine case as well as the two fenders. In order to do so, we used scotch brite pads and grit paper to buff out scratches, and we used a white polishing compound to give them shine.
​From there, we spent lots of time cleaning. We cleaned and re-bagged every part we had taken off of the engine and made sure they were still in good condition.
​
We also meticulously cleaned the crankcase, making sure all of the dirt was scraped off and all of the threads were clean and we prepared the oil tank to be powder coated.
​Then we worked with Glen to realign the flywheel using a hammer – funnily the most technical part of the whole process.

In addition, we took a day off from working on the bottom end to put together the motorcycle lift! It was a great opportunity to put our skills (direction-following, handling nuts and bolts, problem-solving) to use in a new way.
​Clutch & Transmission
Ali W and Hudson
​
We were assigned to work on the clutch as well as the transmission of the ’65 Tiger Cub, responsible for the disassembly, cleaning, and re-assembly. Our first job was to help the top end and bottom end teams take apart the engine, breaking it into the timing side (transmission & bottom end) and the clutch side.
​Top End
Chris and Parker
​Fasteners, and our Fasten-ating Journey!
Micah and Jim
​Forks and our fork adventure!!
Izzie and Alex

We were first assigned the front forks with no previous knowledge as to what or even where they were located on the motorcycle.
​
We spent the first few weeks of class helping disassemble the motorcycle and gathering all of the parts that were a part of the front fork or handlebars. Disassembly was a long process of figuring out what parts were damaged and needed to be replaced.
​We had to use various tools to disassemble the forks and construct replacement parts.
During the assembly process, we cleaned all of our parts and prepped them for the powder coater.
​
After all of our parts were ready to go, we began the process by attaching the yokes to the frame. We then assembled each fork tube individually and fitted them into the yokes, putting the fork bodies and ears on the forks.
Finally we attached the handlebars, speedometer, throttle, clutch, and front wheel onto the motorcycle.
​Wheels
Grace, Aly K, Jenny
​First we had to remove the wheel from the actual bike. We also realized that the front wheel and the back wheel had very similar but different structures.
​
After removing the wheels, we started taking them apart beginning with the front wheel.
We took apart the hub, removing each bearing and nut. In the process, 'Yield' a rust removal spray, became our best friend.

​We then we measured the offset of the hub from the rim so that when we put the wheel back together, we could make sure that the spokes were at the right angle. We also made sure to take pictures of the pattern of overlap of the spokes to ensure accurate reassembly of the spokes.
Next we removed all 40 nipples and spokes, then repeated the process with the back wheel. We had successfully taken apart the wheel!
The '62 Cub
In addition to working on the 65′ Tiger Cub, we have also been working on a 62′ model. In order to have easier access to the engine, we raised the bike up on a lift. We opened up the 62’s engine case to take a look at inside components–cleaning and repairing different miscellaneous components.
After each part of the engine was cleaned and repaired. we took each component and assembled the entire engine. Once finished, we will install the engine in the frame.
​
It was great reinforcement to remember the process of taking apart the bottom end/oil system, and exciting to see how much more quickly it went as we knew what to do when we encountered problems we had seen before!
It was also great practice for the ‘65: once everything was clean and we had decided which parts were not fit to reuse and we had replaced them, we began the process of putting the ’65 back together.
​
This involved fitting the oil pump, buttoning up the case, applying liquid gasket, working together with the clutch, top end, and gaskets teams in this process to make the engine work again.
​Eventually, the entire bike came together thanks to everyone’s hard work. Hearing the engine start and realizing that we played a big role in making that happen was truly rewarding moment as we could see (and hear) the results of our hard work all semester.
The Rebuild and Lasting Thoughts 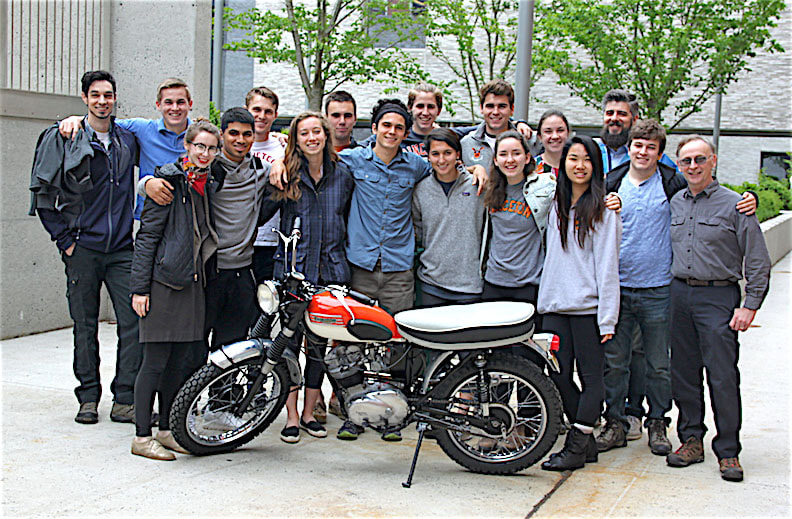 In the weeks following the end of the course, I came to the E-Quad to work with Professor Littman on the History of Engineering project as part of the Summer Practical Research Experience (SPRE). As part of my work this summer, I took a look back at the ’65 Tiger Cub motorcycle to fix a couple of lingering issues.
It was my objective to identify the source of these issues and to address them.

These problems were:
​Oil Leakage Issue
In the investigation of the grey exhaust smoke, shopmaster Glenn Northey and I took a look at several parts of the Tiger Cub’s engine. First, we removed the carburetor and examined the “jets” inside. These small valves control how much air is mixed with fuel when the engine is running, and we theorized that a damaged jet could be allowing the engine pressure to drop, which in turn was allowing oil to seep into the engine.
Our carburetor turned out to be functioning normally, so we turned to the engine’s top end.

We removed the cylinder head and inspected the piston. Sure enough, there was a small gap between the piston rings and the piston shaft. This gap was allowing small amounts of oil to leak up from below the piston into the combustion chamber.
Having identified the cause of the problem, it was decided the piston would need to be replaced with a larger one and the cylinder bored out to suit.