The process we went through with the valves was a fairly smooth one. First, we cut the valves so that they would sit correctly in the valve seats to create a seal.
Next, we lapped the valves, first with a rougher compound and then finer compound to assure that the valves would sit correctly.
Next, we checked our work to see if the valves sat correctly by using a blue compound which showed us where the valves were in contact and not in contact with the valve seats.
​Lastly, we re-assembled the valves and adjusted the rocker gap to assure that the rocker arms would not be too tight while the motorcycle is in operation.
​Carburetor
The carburetor on our bike was relatively complete. We took it apart, took inventory of all the parts and then took the required missing parts from other carbs that had been leftover from previous years.
Once we had all the parts, we reassembled the carb and tested it on the orange bike to ensure that it worked.
Bottom End, Clutch and Transmission
Although the clutch was in a rusty state, it did not need much repair. Therefore the majority of the work was cleaning the different parts to leave them much cleaner than when we started.
We then used a Scanning Electron Microscope to see the different elements the tooth was composed of and were also able to see close up pictures of the structure of the material.

The hardening test was done to different spots of the tooth to see the different hardness's at different locations - important because it lined up with our theory that it was case-hardened.
The tooth was clearly brittle, because it broke and flew off of the machine when too much pressure was applied to a corner of the tooth.
​
We came to the conclusion the tooth had broken off due to an inconsistency in the metal, and that it was brittle and case hardened.
In addition to all of this, most of the bolt heads were in very poor condition and since few of the bolts in the engine were useable, we replaced them all with new stainless bolts of the original diameter and pitch.

As we were using bolts of the original diameter, we could use a new inner primary cover, getting rid of the old cracked one.
We also wanted to use the correct size bolts in the drilled-out engine block, so had to put inserts into many of these holes. With the engine block matching the motorcycle frame, it was important that we not replace them with a different size ones.
We used two types of insert...
Gaskets - "Those fiddly bits that go between the two metal plates" - A wise mechanic
​We decided to make our own gaskets out of rubberized gasket paper by using a 2D "vector" file. We used an electronic drill press to get accurate hole locations and then printed out a 'prototype' on regular paper, comparing it to the actual cover.
If this was correct, we then uploaded the file to a laser cutter for it to cut out the gaskets to the correct dimensions.
​Electrical System
by Kate and Mun

First off, we had to wire an on/off switch into the circuit of the motorcycle. When turned on, it allows the ignition system to work.
We inserted the switch into the circuitry in the headlamp using connectors to enable us to connect and disconnect it easily from the wiring harness.
This allowed for easier handling of the headlamp, since we could take it on and off at our request.
Final Rebuild 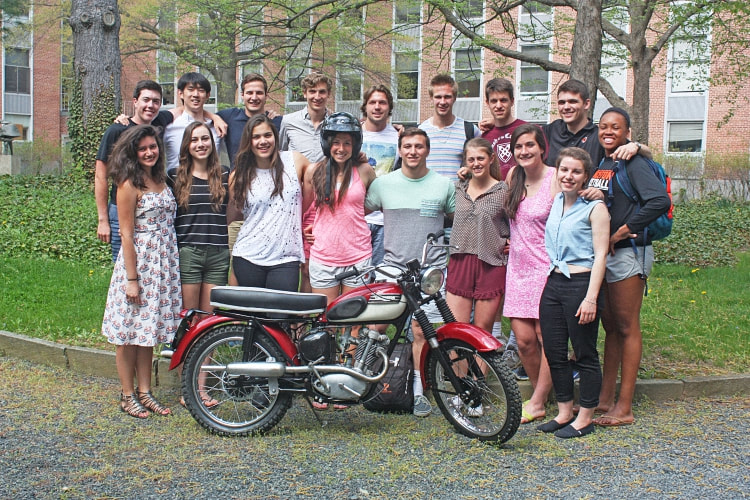