Project - 1960 Tiger Cub
Professor of Mechanical and Aerospace Engineering Michael Littman (in blue shirt) leads a discussion during his freshman seminar “The Art and Science of Motorcycle Design.”
​
The class was open to observers during Princeton Teaching Week, which also featured workshops on innovations and discussions on experiential learning.
Top End
1. Cylinder Head
The first step we took was cleaning up and preparing the different parts of the head for assembly. We covered up precision parts and threads with painter’s tape before sandblasting the other surfaces of the head.

Two new valves that fit perfectly into the head were selected. We could tell the difference between the intake and exhaust valve because the exhaust valve is smaller than the intake.
Exhaust valves are naturally smaller than the intake because pressure from within the cylinder is already forcing exhaust out of the cylinder, so a large opening for the exhaust to flow out is not necessary.
The other smaller components within the head including the rockers, spindles, valve covers, studs, and assortment of washers and bolts were cleaned out with a solvent and wire brush in the parts cleaner.
After grinding the seats, we lapped the valve together with its seat. This process is applying an abrasive (in the form of the rough/fine lapping compound) between two surfaces and rubbing it together. This polishes the surfaces to make them fit more seamlessly together.

We repeatedly covered the surfaces with blue ink during both the grinding and lapping process and spun the valve in the seat to see where the blue ink would spread. This represented the parts that made contact, so we could see the parts which needed to be ground or lapped more. With this done, all the parts were prepared and ready for assembly.

First, we assembled the valve springs. We had to use a special tool that allowed us to compress the valve springs in their place, so we could lock in the top collar with the split cotter. It is important for the valve springs to be locked in because these have a high spring constant and could potentially hurt somebody if they were loose and could come flying out due to an unstable setting.

We also assembled the inlet and exhaust rockers. This was difficult because the rocker spindle had grooves and lips which would catch on various parts and not sit at the exact center.
There were also small holes for oil which had to be aligned for proper flow. What made this assembly all the more difficult was the involvement of springs which had to be pressed and held for long periods of time while assembling this. Its tension also made it difficult to press everything in together.

The rocker arms are connected to the pushrods and these work together to open and close the exhaust and inlet valves. When the pushrod of the camshaft pushes up, this makes the rocker arm push down and apply pressure on the different valves to keep them closed.
It is important the valve opens and closes properly because this controls the breathing of the engine, and several negative effects can result when the timing of inlet and exhaust is offset.
Boring/Honing - the boring process:
The boring process was a delicate process that required ultimate precision. It involves removing a thin layer of the inner metal of the cylinder. We used a dial to measure the evenness through the barrel and we were lucky to work with a completely even cylinder barrel, apparently, this wasn’t the case in the previous years.
Since we intended to use the 40mm piston, we had to ensure that we remove 1/5,000 inches of metal to ensure that we remove the rust while keeping the cylinder barrel airtight.
We mounted the cylinder barrel onto a lathe, and using a cutting tool, we were able to precisely cut 1/5000 inches of the steel.
The honing process:
We used the honing tool and WD40 to clean the cylinder barrel giving it a smooth finish. The honing tool was made of coarse stones which helped in cleaning the cylinder barrel.
​Instead it cleans by agitating the cleaning solvent to create small vapour bubbles in it. This is known as cavitation and is caused by rapid, non-homogenous changes in pressure in the fluid.
These cavitation bubbles then exert tremendous pressure, when they burst, on the impurities which then detach from the body.

This force does not do anything to the part due to its high mass, strong lattice alloy structure and a net force of null due to an uniform force from all sides of the part immersed in the fluid.
​
The solvent used is customized to the part to be cleaned and the kind of impurities on it. We wanted to clean the body of our carburetor which is made up of aluminium, so we used parts-cleaning fluid (oil based organic solvent) to do the trick.
What We Learned 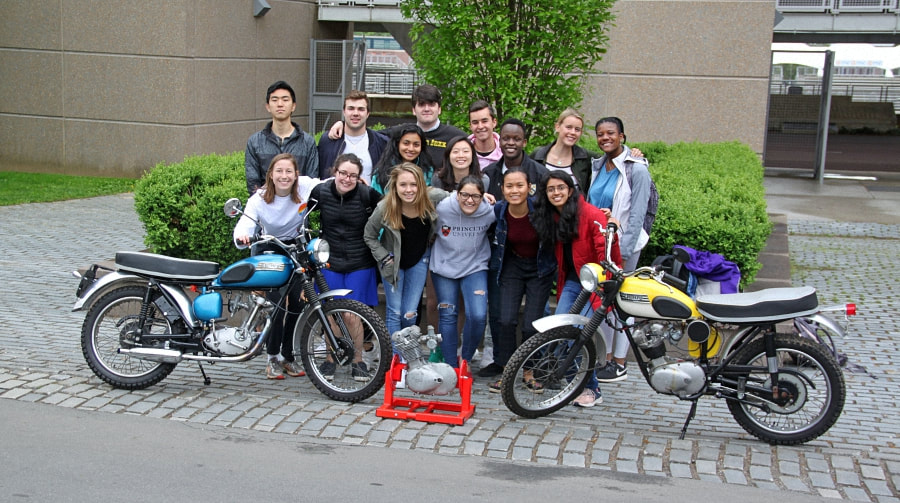