149.315 mph on a Tiger Cub!
​Incredibly in 1959, a one-way speed of 149.315 miles per hour was recorded by Triumph motorcycle dealer Bill Martin of Burbank, California riding his 200cc Tiger Cub powered streamliner at the Bonneville Salt Flats in Utah. 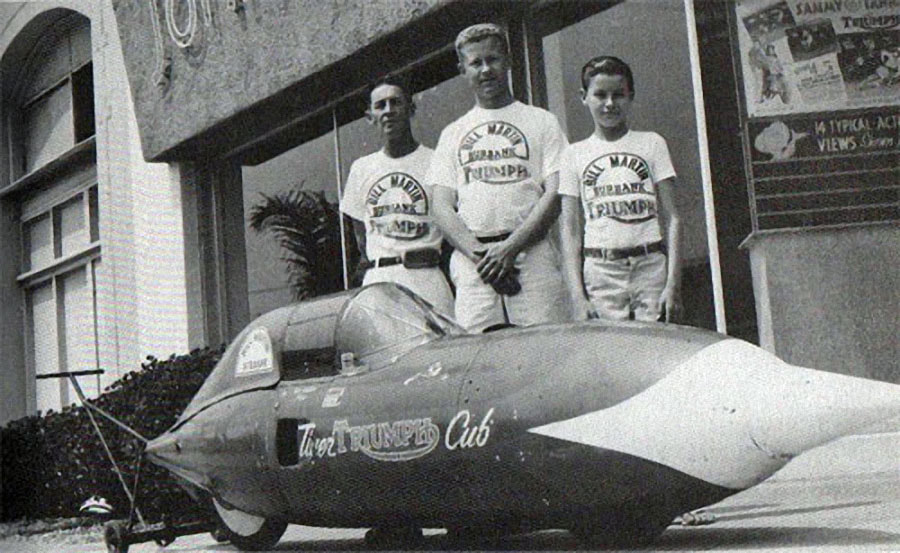 Stock ignition, camshaft, piston and valves were used. The intake port was cleaned out, the rocker arms lightened, JoMo outer valve springs and Webco pushrods installed and a 1 7/32 inch Amal Grand Prix carburettor was fitted. No other engine changes were made.
​
A trial run was made at just over 114 miles per hour and the gas mixture was leaned down before a second run was made at 130.34 miles per hour.
The third and last run was made on a still leaner mixture at 149.315 miles per hour. RPM was in excess of 9100.
​

Johnson was quick to recognise the advantage of using movie stars to help promote Triumph motorcycles and a host of TV and movie stars, including Robert Taylor, Rita Hayworth, Robert Stack and Keenan Wynn, agreed to publicity photos for Triumph.
Some stars, like Wynn and Lee Marvin, raced Triumphs in amateur events and gladly repaid Johnson’s support with free publicity. A young Steve McQueen bought one of his first motorcycles from Johnson, who introduced McQueen to Bud Ekins. McQueen and Ekins became fast friends and later united to help put together an American ISDT team.

Mass media proved to be an excellent way to promote the sport and with Johnson at the leading edge, his company sponsored the first-of-its-kind weekly radio program covering all aspects of motorcycling.