A Lakeland Venture
by Mike Estall
​In March 1958 a group of about fifteen of us had broken away from the West Middlesex branch of the Triumph Owners' Motor Cycle Club and founded a new club which became known as The Southern Triumph Riders Motor Cycle Club.

The new club used to meet in 'The Ostrich' pub in Colnbrook, near London Heathrow Airport. This club later put up a team of despatch riders for the Auxiliary Fire Service, being part of a new Civil Defence scheme and we were the first club in the country to do such a thing.
​The new club organised a ride to the Lake District for the 1958 Easter weekend, (4 – 7 April), staying at a hotel in Coniston. This was quite a serious run even for those on their big Triumph twins, (no motorways then of course), but for myself plus two others on Tiger Cubs and one person on a borrowed Frances Barnet, it was indeed a major endeavour! 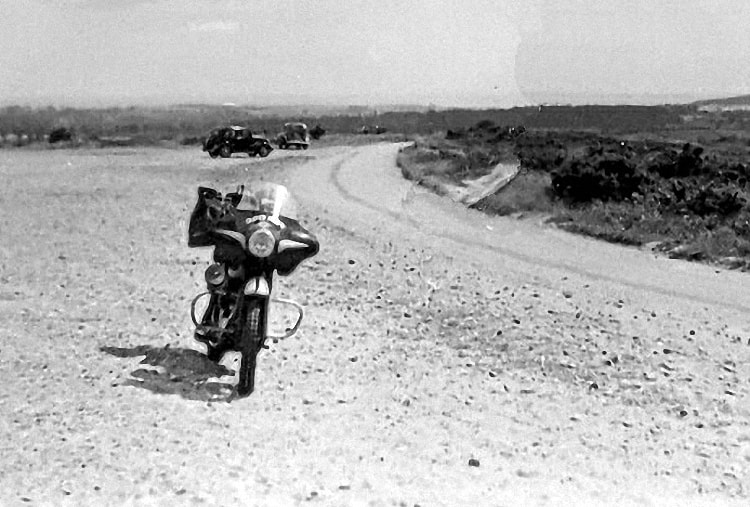 We left the Ace Café on the A406 North Circular Road at 1 o'clock on Good Friday morning and arrived in Coniston just before 2pm, a roughly 340 mile journey that took nearly thirteen hours.
​
(By the way, my home was only five or six miles from 'The Ace' and in the late Fifties I often went there to look at the big bikes I could not afford and also those foolhardy souls attempting the 'Peggy Sue' challenge. I went there again nearly fifty years later in July 2016 for the 'Triumph Day' but took some considerable time to find it. I used to go from Greenford, where I lived, up the Western Avenue towards London, turn left at Hanger Lane onto the A406 and then it was only a mile or so to the cafe, on the left. But in 2016  it wasn't there! By the time I had realised I'd missed it I was three miles up the road, (on which you can't do a 'Uyey'), and had to do another mile or so before I could find a junction to turn around at. 'They' had moved the North Circular Road about three hundred yards east of where it used to be without even so much as letting me know and I'd driven right past the cafe without seeing it.  What a nerve)!

The 1958 northward trek started by going round the North Circular and picking up the A1 Great North Road. As we arrived in Baldock it started to snow. The question was, do we go on or do we abandon the whole thing?

Being young, brave and committed, we decided to go on. Several hours later, around dawn, and after a petrol & pee stop near Grantham, we arrived somewhere near Doncaster where we had a long stop for breakfast in a big wooden transport café. I remember there was a coke-fired 'Pot-bellied' stove, steaming mugs of tea, sausage sandwiches and an hour or so to warm the bones.
Somewhere around Wetherby perhaps we turned westwards and headed over the Pennines. At one point I recall passing a place where the fields were covered in blue dye from some local factory.
​It seems that somehow, the after-crash repairs, we had missed the fact that his rear brake pedal had not fully returned and had been keeping the brake very lightly on. By the time we got to those traffic lights Sir Benjamin Thompson's theory that 'Work and Heat are Equivalent' was being clearly demonstrated!

We all stayed at the hotel in Coniston, but all the other members on their 500/650cc twins had come up through Manchester and had arrived well before us on the tiddlers. (Why we lightweight bike riders didn't use the Manchester route as well is long forgotten).
That Saturday morning there was much fiddling and fettling in the garages at the back of the hotel, getting the bikes back into shape after the long ride.

Being the club ‘Runs Captain’, I led a short club run around the lakeside lanes after Saturday lunch. At one point somewhere along the way we encountered a greasy bend and one or two parted company with their mounts, but I was at the front and was OK. No serious damage was incurred only some loss of dignity!
​I got home on the late Monday Bank Holiday evening, ate some very welcome grub, went to bed, got up at seven the next morning and went to work. Well, that's what you did and I was much younger then!

Here I am back then in the Lake District, the young chap with a dark sweater and a flat cap on my nut, 3rd from the left. 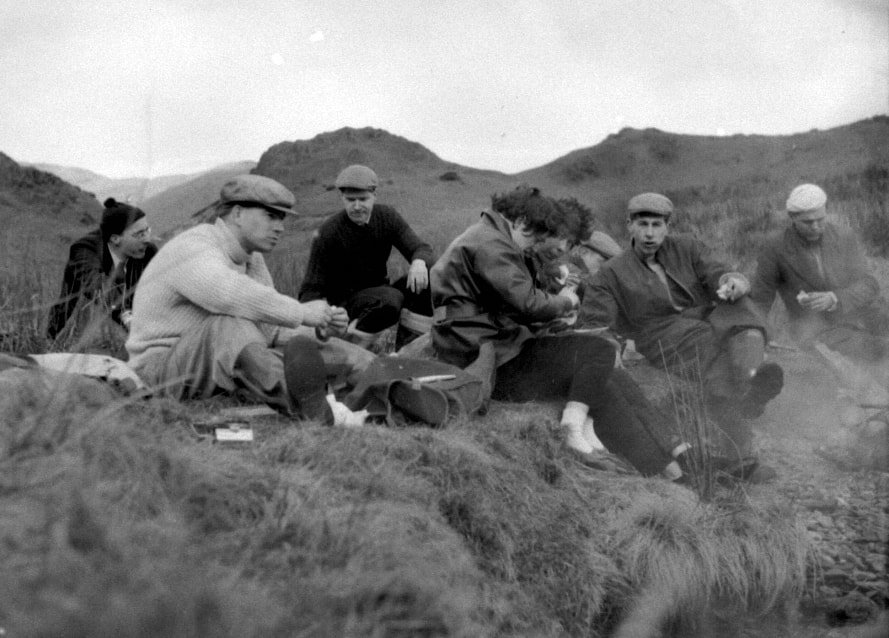