Terrier T15 1952/56
​Causing a sensation with the public at the 1952 Earls Court Show was a machine that had taken just eight weeks to go from conception to reality. In fact it proved to be so popular, a second machine had to be brought onto the Triumph stand to satisfy eager show-goers.

Looking at the new Triumph Terrier it was easy to see why, because here for all the world to see was a Speed Twin in miniature resplendent in identical Amaranth Red livery. Not since the 1930's had the company had such a model in its line up, with the brand new 149cc motorcycle on display being the first small capacity, single-cylinder machine to come out of any Triumph factory since before World War II; and amongst the multitude of small two-stroke, ride-to-work machines from other manufacturers, it stood out like a shining beacon in the dark. 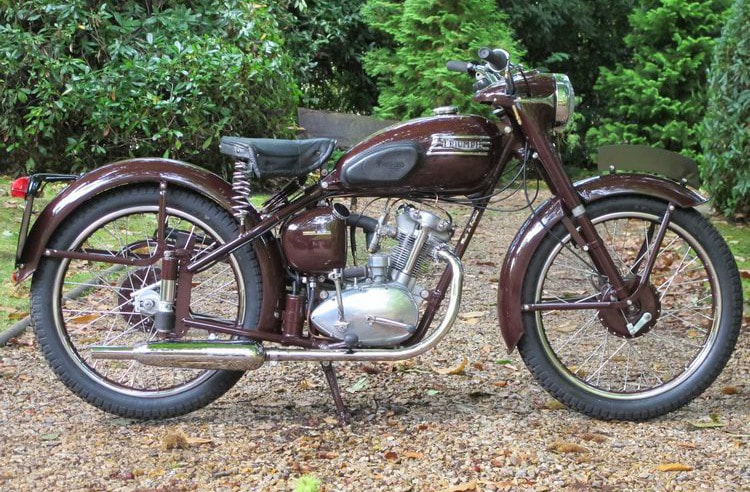 ​Edward Turner had brought together a design team consisting of himself, chief draughtsman Harry Summers and styling engineer Jack Wickes to develop a brand new small capacity Triumph motorcycle.
​
He had also insisted any new Triumph model must be faster than rival small machines, look like the rest of the Triumph range, and be charming enough to keep riders loyal when they wanted a new or larger machine (see 'An Interview with Mr Turner' elsewhere on this website).
​To further publicise the new machine. Three people from the factory rode three new Terriers taken straight off the production line from Land's End to John o'Groats where performance figures for the trip (remember no motorways in those days) showed an average speed of 36.68mph and 108.6 miles per gallon over the total of 1008 miles!
​The feat certainly demonstrated Triumph's new Terrier was capable of astonishing performance and fuel consumption and as a result, dealer's order books for the machine were full to overflowing for the next 12 months.

​​It wasn't only on this side of the Atlantic where the new machine was causing quite a stir. Triumph dealers in America were also keen to have the new Terrier in their showrooms, especially after a road test carried out by 'Motorcyclist' editor Bill Bagnall had appeared in the December 1953 edition of the magazine. On a 100 mile route taking in open highways, hills, winding roads and city traffic, he reported covering the miles in admirable fashion - cruising indefinitely at 45 to 55 mph and a top speed of 65 mph whilst sitting upright. Taking up a more sporting position he reached an indicated 70 mph on the Terrier's speedo, which had been checked for accuracy before the road test.​
Both the Terrier and the Tiger Cub shared the same plunger rear suspension, the Terrier eventually finishing production in 1956, the year before the Cub went rear swing-arm. Triumph's lightweight challenge going into the future was now to be championed (very successfully) by the larger engine machine.
​
Just how many new motorcyclists taking to the road for the first time had been attracted to the Triumph marque by the Terrier's appearance on the scene will probably never be known. But it is fair to say it would have been substantial.