Fitting an external canister oil filter to a Tiger Cub
Like many projects, this one started with just one small part of the complete machine. The small part on mine was the battery/tool box lid. It was a bit 'battered' to say the least!

It had always been like that and was the sort of thing perhaps not many noticed (or at least didn't say they'd noticed). But I knew it was there and to me, it stood out like a Henry VIII codpiece. Something finally had to be done to remedy it, but what?

​Having seen new battery/tool box lids for sale and available, I had toyed with the idea of buying one, spraying it up and fitting it. But after removing the compete box, I found the whole thing would need far more fettling than just a new coat of paint to 'bring it up' a bit. Years of leaky batteries had obviously taken their toll, and what would once have been metal was now fresh air!
​It's fair to say my Tiger Cub isn't a standard 'as it left the factory' Cub. According to the log book and the matching frame and engine numbers, it's a T20 originally registered on the 6th of April 1966 in London. But at sometime in its life, heavyweight Cub forks, Sports Cub wheels, alloy mudguards and a host of other cycle and engine parts have been added.
I have no idea when, but it suits me just fine, it's part of its history and I wouldn't have it any other way.

​​I had also been toying with the idea of putting an exterior oil filter assembly on the bike, as like many older Triumph machines, the standard Tiger Cub oil filter design can definitely be improved on. Not only that, an exterior canister oil filter would add some welcome extra oil capacity to the system. Around 350cc extra. But where to put it - easier on one of the bigger Triumph machines, but on a much smaller Tiger Cub?

The space once occupied by the now missing battery/tool box gave me the inspiration. Would the oil filter assembly fit there? Time for some serious measuring. But if there was to be no battery box to hold a battery, where would a battery go?
​
In fact it was to go altogether along with a change from a positive earth 6v to a negative earth 12v system, the fitting of a new regulator rectifier and Lucas type-2MC capacitor and spring holder - more on that later.

Measuring over, drawing complete, it was time to fabricate a mounting for the oil filter inlet/outlet assembly to bolt to. One that would also bolt to the same flat metal crosspiece between the top frame tubes under the seat the ignition coil is bolted to.

A couple of things quickly became clear though.
​​First off was to measure the outside diameter of the tubes and luckily, if they were sawn off and the remainder carefully drilled out of the housing, it would be possible to tap them to take 1/8 BSP fittings with 90 degree swivel hosetails for the 1/4 inch oil hose necessary to connect to the Tiger Cub oil return and then to the tank. 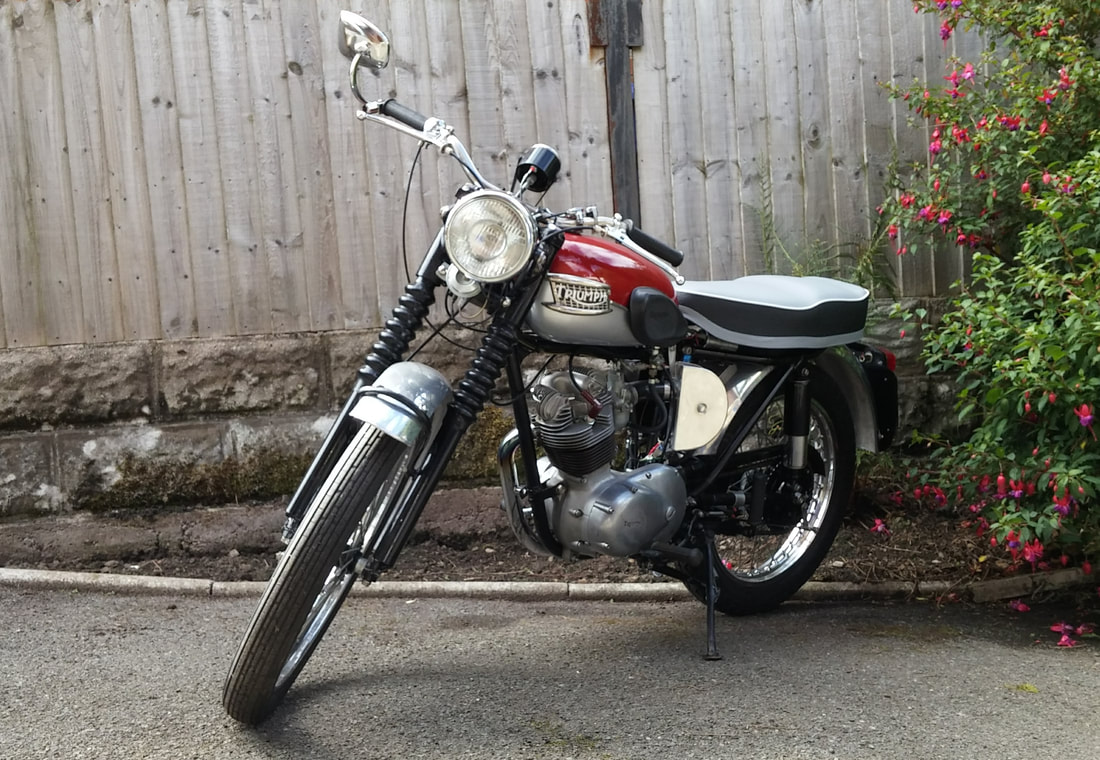